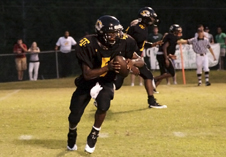 SILAS — Southern Choctaw’s senior class made the most of the first playoff appearance of their careers.

The Indians earned their eighth straight victory with Friday’s 43-20 win over Red Level in the first round of the Class 2A playoffs to advance to play at Elba next week.

“It was a thrilling win,” Southern Choctaw coach Jeremy Noland said. “We made some mistakes, but we were able to pull it out.”