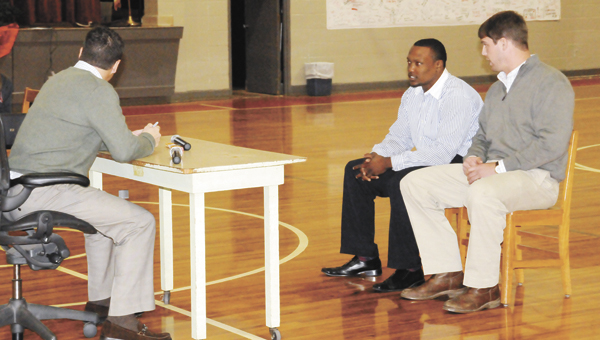 Former Alabama players Cory Reamer and Chris Rogers (right) participate in a skit where they are being interviewed for a job by Mike Nichols, (left) whose character they bullied years before. | Andrew Garner/Star-News

Former University of Alabama football players Cory Reamer and Chris Rogers paid a visit to Andalusia Middle School on Tuesday to talk to students about bullying.

MPAC (Making Positive Adult Choices) works with athletes across the nation to give back and begin self awareness, coordinator Mike Nichols said.

“We’re here to try to inspire and encourage the kids today,” Nichols said. “We’re talking about bullying, the effects of bullying and how bullies are present not only in school, but just in life.

“You might be excluded from playing video games, or the ‘in crowd’ or your boss,” he said. “We’re just trying to talk about dealing with bullies and how to make it work and inspire you.”

Nichols works full time with Dr. Pepper, and has been volunteering his time with MPAC for the past four years.

During the presentation, Reamer and Rogers participated in a bullying skit, where they pushed Nichols around while at school.

One segment of the skit showed Reamer and Rogers being interviewed for a job by Nichols 15 years later, who played the person getting bullied in school.

After the skit was finished, each talked about bullying and the different kinds of bullying.

“We just want y’all to understand to not be the bully — that guy,” Reamer said. “It’s no fun when you go to school every day worrying about somebody pushing you around.”

Rogers touched on the different kinds of cyber bullying such as intimidation and the intent to harm.

“I was considered a bully in middle school,” Rogers said. “Then, I started realizing that I don’t have to intimidate anybody.”

After the presentations, Nichols talked about the intent to harm others, and what the right solution would be to counteract the intention of harm.

“You’ve got to tell an adult now, and you’ve got to stand with anybody to mitigate bullying,” Nichols said.

AMS principal Vicki Anderson said she thought that bullying was a good subject to go over with the approximately 100 students on Tuesday afternoon.

“Of course, nationally you see or hear something on TV every day about somebody bullying on line or making fun of somebody,” Anderson said. “I thought that would be a good subject — not that we have it going on (at AMS). But, if it is going on, I just want them to discuss the subject.”

Reamer and Rogers played on the 2009 BCS National Championship team for the Crimson Tide.

Reamer will be working at Stern Agee in Birmingham, and Rogers will be in Baltimore working for Under Armour.

Pleasant Home’s Colter Poole scored 20 points to help lead his team to a 55-33 victory over J.U. Blacksher on... read more