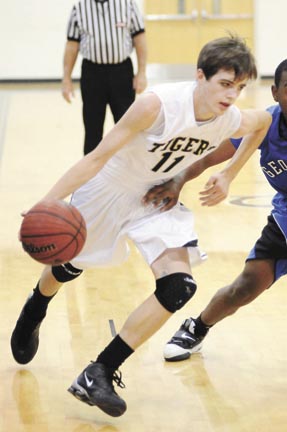 Straughn’s Austin Pickrel led the Tigers with 21 points on Tuesday night, but it wasn’t enough as Georgiana pulled away in the second half on its way to a 39-34 win in Straughn.

SHS assistant coach Marc Tracy said Tuesday night’s game is an example of how it’s been all season for the Tigers.

“It’s kind of the same thing that’s really been biting us all season,” Tracy said. “We can’t seem to finish games. Once we find out how to finish games, then we’ll be playing more consistiently with people.”

The Tigers started out hot in the first period, taking a 12-6 lead heading into the second period.

During the first period of play, the Tigers utilized their inside game attack, taking a 10-3 lead late.

Straughn’s inside game came as a result of Pickrel, Hoby Hughes and J.D. Driver connecting with each other in the paint.

“Austin is doing a phenomenal job for us right now,” Tracy said. “The effort is there from everybody. We’ve just got to get all of us to have a great game.

In the second period, the Tigers were in complete control on a pair of free throws from Avery Driver. Driver finished the night with six points.

After a quick-paced first period, the Tigers slowed down their tempo passing the ball on the perimeter to shake up Georgiana’s man-to-man defense.

At the half time buzzer, Georgiana managed a three-pointer to cut its deficit to five points at 20-15 at the break.

The Panthers chipped away at Straughn’s lead in the third period outscoring the Tigers 9-5.

It remained a close ball game in the fourth period, where the game was tied at 27. A good free throw helped Georgiana take a 28-27 lead, and the Panthers never let up sealing the five-point victory on transition and defense.

Straughn will play host to Greenville on Friday. B-team tips off at 4:30 p.m.