Straughn coach Trent Taylor said he would sum up the 2010 season as one that was “better than what we could’ve anticipated.”

“Obviously, it was a success,” he said. “This group of seniors that are about to graduate — they won 19 football games in two years. That’s pretty impressive.”

This was the first year the Tigers joined the tough ranks of Class 4A, and they finished 10-2 and in the second round of the state playoffs. Straughn fell to eventual state champion Thomasville.

“I think that’s a success at any level,” Taylor said about his team’s first year in 4A. “Obviously, we don’t know what the future holds. The thing that we learned from our second round opponent (Thomasville) is that they’re pretty good — the best in the state,” he said. “It’s just one of those things. We’re here, and we’ve got to get used to it.”

Straughn, like rival Andalusia, did not lose a until the second half of the season.

Taylor said it might seem strange for a few people, but the Hillcrest-Evergreen was the game that proved to be a “turning point” for the team. Straughn won 22-15, and came back after trailing 15-14 late in the fourth quarter.

“It was a game which, to be honest with you, we had not really done anything offensively most of the night,” he said. “We had the ball on the 20 to 30 yard line, and we had 70-80 yards to go and had not done anything.

“For whatever reason, things starting clicking at that point, and we were able to drive the length of the field and score with hardly any time left in the game to win the game.”

After defeating Bullock County in week No. 6, the Tigers faced Andalusia, where the Bulldogs handed them their only loss in the regular season.

During the ensuing weeks proceeding the Andalusia loss, Straughn beat Headland 48-6; Ashford 21-0; and Daleville 12-6 to end the regular season.

For the first round of the playoffs, the Tigers were to face UMS-Wright, and Taylor said that was another game where his team’s true character showed on the field.

The Tigers trailed 32-20, and surmounted an offensive attack, scoring two touchdowns and two two-point conversions to beat the Bulldogs from Mobile.

“That was another one of those games when you were down by 12 against a football team that had been there (in the playoffs),” Taylor said.

Taylor said one big key this year that led to his team having a successful season was that each player came to the realization that it had to be a “team effort” week in and week out.

Looking ahead to next year, Straughn will miss the biggest senior class in school history, Taylor said, of the group that has accomplished many feats.

Taylor said each senior will be greatly missed.

“To win 19 football games in two years makes them a special group,” he said. “They’ll be missed for a lot of reasons. Hopefully, they have set some examples and done some things the kids behind them can follow and go from there.” 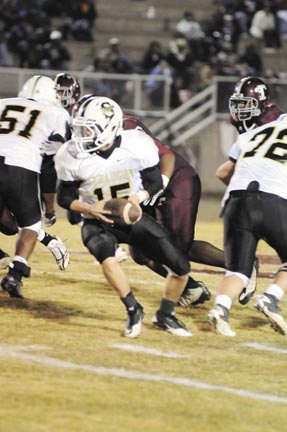 Straughn’s Chase Short hands off the ball during the second round playoff game against Thomasville on Nov. 12. | File photo