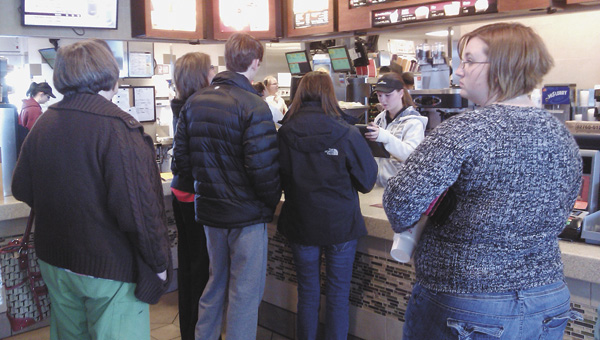 Local clothing stores weren’t the only local businesses with lines of patrons visiting utilizing their services. McDonald’s saw an influx of customers Monday during lunch and after. | Stephanie Nelson/Star-News

Local merchants on Monday saw “a good many” people their first day open after Christmas.

Nationally, residents flocked to retailers on Sunday, and the National Retail Federation predicts that holiday sales will reach $451.5 billion this year, up 3.3 percent over last year.

That would be the biggest year-over-year increase since 2006, and the largest total since sales hit a record $452.8 billion in 2007.

The same could be said at Ansley Place, where owner Louisa Mann described the retail season as “blessed.”

“We certainly appreciate everyone shopping at home where Christmas merchandise is now 50 percent off,” she said.

At Madi’s Place on Hilcrest Drive, Christi Wood said they had seen a steady stream of customers on Monday thanks to half off all Christmas items, and returns and after Christmas deals had a good many people coming into Ward & Co., Mike Ward said.

“We’ve had people coming in to exchange,” he said. “It’s always good after Christmas.”

Local merchants were drawing customers in with special after Christmas sales.

“We have Polo on sale, a big shoe clearance, watch lines and a lot of clothes on sale,” Ward said.

Hardage said that Lena Ellen has 50 percent off all Christmas items and gourmet items, as well as 20 percent off Sorrelli jewelry.

Madi’s Place also has 50 percent off all Christmas items.

To compete with the big chains, such as Wal-Mart and others, Ansley Place works to offer the best personal service, Mann said.

“We just try really hard to keep our prices as low as we can,” she said. “We’ve had a good year, and a good Christmas.”

Ward said that his store doesn’t have to work as hard to compete with the chains when temperatures are cold outside.

“We keep selling North Face,” he said. “In certain categories, we’ve sold out. Our year hasn’t been quite as good as last year, but it’s still been good.”

Hardage said Lena Ellen is simply “doing what we normally do.”

“It’s been a great year,” she said. “We’ve had a really great turnout of people buying our spa days and clothes.”