A law student has been learning the ropes of rural law as an intern with the Covington County Circuit Court and Judge Ben Bowden over the past six weeks.

Caroline Mathews, a student at the University of Alabama School of Law, was awarded the internship through the Finch Initiative, which provides law students an opportunity to learn and experience the court process in a small-town setting. 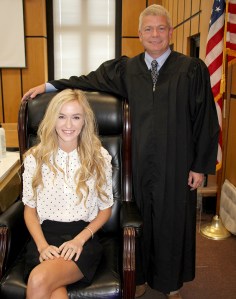 Mathews is a native of Athens, Alabama and earned her undergraduate degree in English Literature at Auburn University in 2020 with a minor in Studio Art. She just completed her first year at the UA School of Law.

Her passion for law comes natural as her father, Bill Mathews, practices in her hometown of Athens. In addition, her brother William recently graduated from the Cumberland School of Law and another brother currently attending Auburn, John David, is also interested in attending law school.

Mathews said she learned about the Finch Initiative program through an email from the dean of the law school. She said learning more about rural law piqued her interest.

“I alway knew I wanted to be involved in a small-town practice,” she said. “This experience provides a glance into the many different things associated with practicing law in a rural setting. When I saw the notice I knew it would be a great opportunity for me.”

The process to obtain the Finch Initiative internship included an interview and having to decide between two locations: Fayette or Andalusia.

Being an English Literature major, something else caught Mathews’ attention about the program. The Finch Initiative is named for the fictitious lawyer, Atticus Finch in Harper Lee’s “To Kill a Mockingbird.”

“Being an English major it certainly appealed to me that it is named for that character. I love that story and growing up reading it in school always reminded me of my dad and what he does in a small town,” she said.

As Mathews’ internship in Covington County comes to an end, she said she has learned a lot about the area and working inside a courthouse.

“In law school it is sometimes difficult to put together all the pieces. You are learning a lot of theoretical things. I’ve enjoyed being able to see law in action. Right here in this courthouse is the district court judge, circuit court judge, probate judge, clerks, court reporters, all the attorneys. Even though my father is an attorney, I have not had the opportunity to be inside of  a courthouse for an extended period of time. Being here has really opened my eyes to everything that goes on,” she said.

Mathews also had the opportunity to meet local and regional elected officials, toured local plants such as Power South and even traveled to Montgomery with Rep. Mike Jones. She especially enjoyed learning from Judge Bowden.

“He could be a professor. He’s a wonderful teacher … he explains things well and is very patient. I was able to work on a lot of different things for him. I got to view his cases and he would take the time to talk to me about them afterward. I couldn’t have asked for anything more,” she said.

With her internship coming to an end at the courthouse, Mathews will begin preparing for the fall semester of law school at UA.

“The mission of the fellowship is to provide a law student with the practice of law in a rural setting,” said Judge Bowden. “We are so fortunate to have someone of the caliber of Caroline to intern with the court system.  She has been a huge help to me this summer and I hope she has had a good look at what lawyers and judges do in our part of the state,” Bowden said.

Her long-term goal is to graduate law school and follow in her father’s footsteps as a small town lawyer.

“I used to think being in a small town might limit you, but this experience has shown me that these lawyers get to work on so many different things. It’s really opened my eyes to all the possibilities involved with practicing in a small town.

“I’ve experienced so much during the time I was here. It has exceeded all of my expectations,” she said.

Mathews is the daughter of Bill and Heather Mathews.