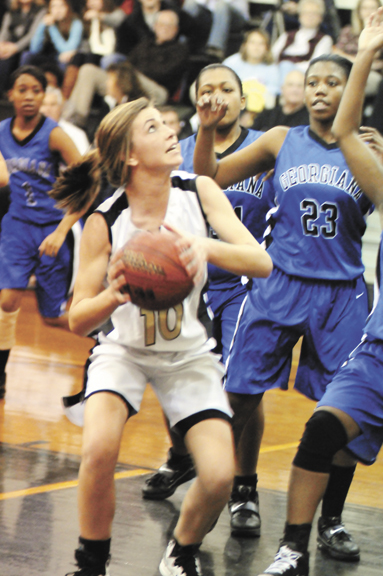 Straughn’s Jacie Williamson led the Lady Tigers with 21 points in a 58-46 rout over Georgiana on Monday at the 13th annual Red Level Christmas Invitational tournament.

Williamson scored 16 of her total points in the first half.

The Lady Tigers took an 18-7 lead after the first period because of their transition, inside and perimeter games. In addition, Straughn made 13 jumpers.

Straughn kept the momentum going in the second period, and made crucial put backs and break away lay ups to take a 29-13 lead with 3:50 left on the clock. The Lady Tigers took a 34-21 lead at the break.

At the end of the first half, Georgiana made a little run knocking down free throws, which SHS girls coach Scott Kinsaul said his team allowed too many.

“For the most part, we played well,” Kinsaul said. “We fouled too much, and we put them on the line too much, but overall, I was pleased.

“We’re still getting better,” he said. “We’re better now than what we were at the first of the year. That’s what we’re aiming for.”

Straughn tok a 45-31 lead late in the third period, and ended up leading 49-31 going into the fourth.

That was all Straughn needed because the Lady Panthers outscored the Lady Tigers 15-9 in the final period of the contest.

Straughn will face the winner of the Red Level-Luverne game at 6 p.m. tonight in the semifinal round.

Senn selected to 1A All-State team