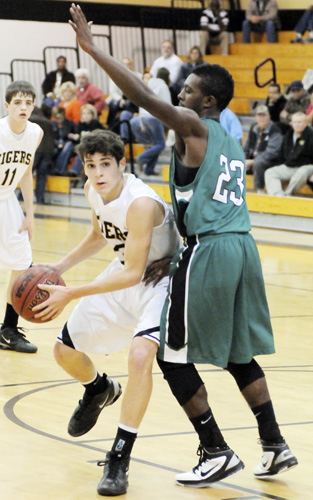 STRAUGHN — Trailing by 11 points at half time, Straughn’s Avery Driver hit four tres in the third period, and helped lift the Tigers to a 46-45 regular season victory over Brantley Friday night at SHS.

Driver finished the night with 22 points. He hit five three-pointers in the game.

Brantley led the first two periods, outscoring the Tigers 17-13 in the first period, and 9-2 in the second.

The second half was completely different for Straughn on defense and from the line.

In addition to Driver’s five tres, Pickrel had essential drives to the basket, and recovered rebounds to keep the ball in play for Straughn. Pickrel had 14 points in the win.

Driver nailed a tres as time expired in the third to help lift his team to a 34-33 lead going into the fourth period.

SHS boys coach Rusty Andrews said his team had the best game at the end for two reasons.s

“For once at the end of the ball game we finished by not turning the ball over, and making free throws,” Andrews said.

Pickrel made two free throws to bring his team out of a 42-42 tie. The Tigers were 13-of-16 from the free-throw line Friday night.

Then, Brantley started to claw its way back with the help of its perimeter attack.

A late tres by Devante Porter put the Bulldogs ahead 45-44 with 43.3 seconds left in the contest.

Driver then was fouled, and sealed the win making two free-throws with 20.9 seconds left.

“We played through it, and we played hard,” Andrews said. “We still made some mistakes, but are learning how to play basketball.”

In girls action, the Lady Tigers fell to Brantley 47-26.

Straughn will play host to rival Andalusia next Tues., Jan. 18 in area action.

A ‘tough road’ ahead