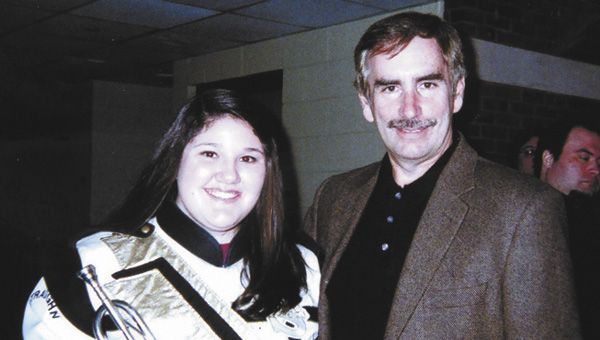 Erica Ziglar’s love of music recently led to a seat on the University of Alabama’s honor band.

This Straughn High School trumpet-playing junior was recently chosen as one of two students in Covington County to try out for a spot with the UA honor band.

And she made it.

The Alabama Honor Band Festival is an event developed for the purpose of recognizing the achievements of exceptional high school musicians. This year’s event was held Feb. 3-6 and included clinics presented by the faculty of the University of Alabama School of Music.

Ziglar, who has been performing with the First Baptist Church student orchestra since the ninth grade, immediately applied for the honor after SHS band director Wade Caudle posted the announcement on the band’s Facebook page.

With only a week to practice the audition music, Ziglar said she put her all into it, and when she was chosen as a seventh seat trumpet player, she was shocked.

“I thought I completely tanked it,” she said. “Turned out, I did alright.”

This year, there were four honor bands seated at the festival – one top-level band made up of the top chair winners and the three festival honor bands. There were 12 chairs available in each band.

“The experience was amazing,” Ziglar said. “I got to meet the University of Alabama’s band director, Dr. Ken Ozzello, and so many other people.

“There were 50 people in my band,” she said. “And it showed me that if you love what you’re doing, it doesn’t take a lot of people to make a big beautiful sound. We did ‘Amazing Grace,’ and it was the most beautiful arrangement I had ever heard of that song.”

Ziglar is the daughter of Scott and Karen Ziglar. She has been playing the trumpet since she was in the sixth grade.

“When I went in to choose an instrument, I wanted to play the clarinet,” she said. “My aunt played it, and I wanted to be just like her, but the reed hurt my mouth.

“I had heard of trumpets being played in the Bible,” she said. “The Art’s Music man pulled it out, I played a note, and that’s where it started.”

Ziglar said she was also chosen to participate in the Troy University honor band; however, the event was held the same weekend. She elected to go to UA.