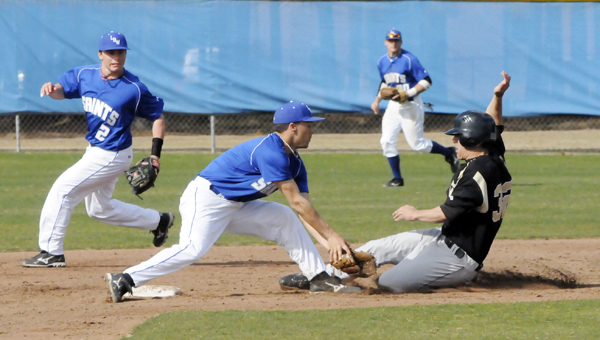 The Saints beat the Warriors 9-8 in extra innings Tuesday night to split with ECCC. | Andrew Garner/Star-News

With the bases loaded and the count at 2-2, former Opp player Zach Sasser was hit by a pitch to score Chad Dickinson in extra innings to help lift LBWCC to a 9-8 win over East Central Community College Tuesday night.

The Saints split with the Warriors, who took the first game of the doubleheader, winning 9-4.

Trailing 6-5, LBWCC’s Josh Thompson scored on a passed ball to tie the game in the bottom of the seventh inning.

In the top of the ninth inning, ECCC took an 8-6 lead.

The Saints edged into the Warriors’ lead when Clark Grey hit a sacrifice grounder to score Thompson in the bottom of the ninth.

Free then scored on a wild throw to left field, where Dickinson advanced to second base.

Dickinson then made it to third on a passed ball, and Alex Banks reached on a walk to load the bases.

The Saints scored three runs on one hit and two errors in the decider.

Brant Still was 1-for-4 with two RBIs. Grey and Thompson had one RBI each.

Chad Wallace got the save for the Saints.

With this victory, the Saints improve to 4-4 on the season, and will travel to play Marion Military Institute this Sunday at 1 p.m.

Jeffrey Enloe earned the loss for the Saints.