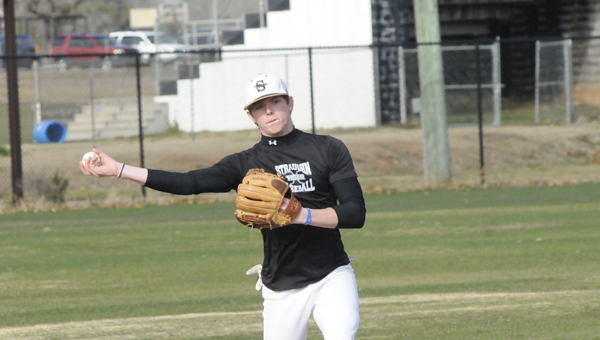 With a combination of eight returning starters from last year’s team and 10 seniors, Straughn baseball coach John Fussell said Thursday that his team is anxious to get the season started.

The Tigers are coming off a 27-8, 2010 season, where they finished in the first round of the Class 3A state playoffs.

This season, Straughn has joined the Class 4A ranks, where it will play in Area 3 with rival Andalusia, Headland and Ashford.

“We’ll be playing the best 2-out-of-3 series, which is good because we did it to model the rounds of the playoffs,” Fussell said. “That’s how our area match ups will go.

“I don’t know anything about Ashford, but I do know that Andalusia and Headland will be tough opponents,” he said.

Straughn is comprised of 10 seniors, two juniors and three sophomores.

Getting past the first round of the playoffs this year is high on the team’s priority list, Fussell said.

“Last year, we were 27-8, and we beat some quality teams,” he said. “We beat the 3A state champs twice, and got out the first round.

Straughn will start its season Monday in a doubleheader against Leroy at Alabama Southern Community College in Monroeville.

When it all comes down to it, Fussell said he wants his players to play their “best” this season.

“They’ve been working real hard,” Fussell said. “They know the expectations are pretty high. We’re just trying to play one game at a time. If they’ll play to the best of their abililty, that’s all you can ask from them. That’s what I hope.”

Bracewell reflects on sport she loves