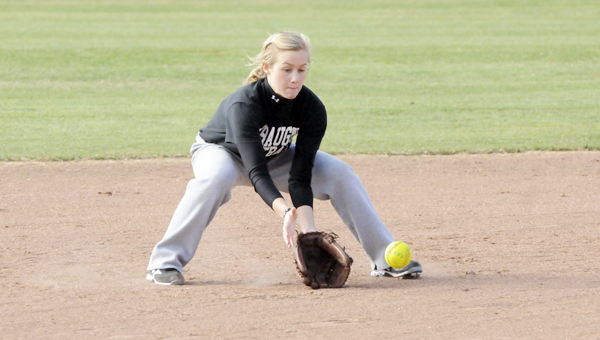 Straughn senior Kaitlynn Wiggins grounds the ball at practice Wed., Feb. 9, 2011. The Lady Tigers aim to be competitive in their new classification this season. | Andrew Garner/Star-News

“We need to do a little better. We’re going to have to be a little hungrier this year.”

That’s what Straughn head softball coach Ray Wilson said to describe what his team’s mentality is like as the Lady Tigers await the start of a new season.

Straughn finished the 2010 season 33-13-1 at the Class 3A state tournament, where it lost to Elkmont 3-2 on the first day of the double-elimination contest.

This year, the Lady Tigers will play in Class 4A, and will join a four-team area rather than a two-team area, as was the case the last several years.

“They just know we didn’t get as far as what we wanted to last year — what our goal was last year,” Wilson said.

Straughn’s varsity team will be comprised of eight seniors, two juniors and three sophomores this season.

Wilson said a point of emphasis this season is making sure the girls hit well at the plate.

“With eight seniors, we’ve got a lot of experience, and a lot of these girls that have been playing are three-to-four-year starters,” he said. “They know what the expectations are set out for them.

“They know what my expectations are, having played for me for that long,” he said.

The Lady Tigers will compete in an area that had — including themselves — three teams make an appearance at the state tournament last season in Ashford and Headland. Andalusia finished its 2010 season at the South Regional Tournament in Gulf Shores.

“Last year, there were only two teams in our area, so you were guaranteed a spot at regionals,” Wilson said. “You’re not guaranteed anything this year with the area we’re in.”

Wilson said the team hasn’t set any goals as of yet, but is looking for the eight seniors to give good leadership this year.

As far as who is playing where, Wilson hasn’t decided the make up of the infield and the outfield.

In pitching, the Lady Tigers have seniors Messick, Wiggins and Caraway to fill those slots.

“I feel like we have three very good pitchers with Katy, Kaitlynn and Paige,” Wilson said. “Each one of them brings a different type of game as far as pitching goes. Each one of them are very competitive.”

Straughn’s varsity softball team will begin its 2011 season on Fri., March 4 at a two-day tournament in Ozark.