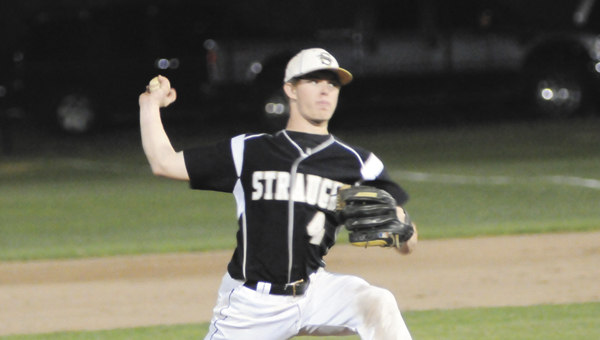 Whenever Josh Dewrell finds himself in a jam on the pitcher’s mound, he draws a cross on the mound, talks to God and finishes the inning.

“He’s the main factor at why I pitch the way I do,” Dewrell said. “It’s not me pitching up there on the mound, it’s God working through me.”

Last Thursday, Dewrell signed a scholarship to play baseball at LBWCC for the Saints and that night against Opp, he was in a jam with bases loaded and one out in the second game of the doubleheader.

“Used to when something wouldn’t go right for me on the mound, I’d get frustrated,” Dewrell said. “Thursday, I was at peace, so to say. I never got mad, and I never got angry. When those bases were loaded and when it was one out, I was calm.”

Dewrell helped lead Straughn to a second-game 11-6 win over the Bobcats, and the doubleheader sweep. Straughn won the first game 3-1.

When asked why he picked LBWCC, Dewrell said it was the best decision for him.

“Me and my parents (Mark and Jennifer Dewrell), whenever we talked about it — we talked about staying at home and getting used to college life for me,” he said. “(Saints head baseball) Coach (Steve) Helms, we talked, and he said with him being able to work with me as a pitcher that he’d do a lot of things for me.

When Dewrell was 5 years old, he started playing baseball in the Covington County rec league. He has been a six-year starter for the Tigers.

Additionally in football, he helped lead Straughn to the second round of the playoffs in football in 2010 as the starting quarterback.

In the end, baseball is his game.

“I love football. I love Friday nights,” Dewrell said. “I’ve always loved baseball since I was little. That’s always just been my sport.”

Before baseball games, Dewrell said the team gets together and prays that God would be shown through their actions on the field.

Each season, the Tigers adopt a Bible verse to carry them.

This year’s verse is Romans 12: 9-10, which says, “Love must be sincere. Hate what is evil; cling to what is good. Be devoted to one another in love. Honor one another above yourselves.”

After LBWCC, Dewrell said he plans to transfer to Troy University.

The Tigers have already played eight games this season, and Dewrell said the seniors are looking forward to having a good year.

“I know none of them are nervous,” he said. “We’re just ready to play, and show people what we can do.”