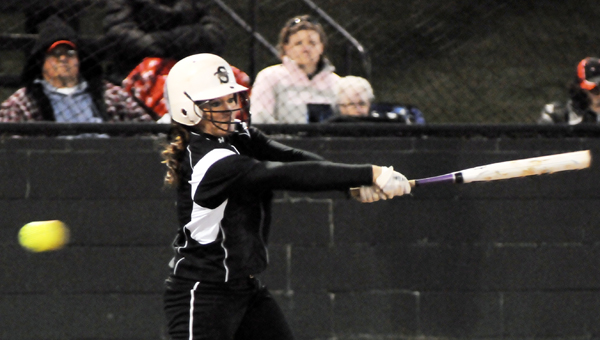 At the conclusion of Thursday night’s game against Kinston, Straughn’s softball team had a meeting and then set up for practice.

The Lady Tigers fell to the Lady Bulldogs 3-2, and only managed seven hits during the contest.

“We just didn’t get anything going late there,” SHS girls coach Ray Wilson said. “That’s what I just stressed to them right there (after the game).

“We’ve got to start a little bit earlier in the game,” he said. “I still think the pitching and defense played well.”

Kinston scored first on a sac fly early in the game, to take a 1-0 lead.

In the top of the sixth, Kinston score two runs on a passed ball and an RBI to lead 3-0 heading into the bottom of the sixth inning.

Straughn then scored its two runs on two hits.

Kaitlynn Wiggins got things started with a slap down the line, and beat the throw at first. Paige Caraway had a good eye and walked to put runners at first and second base.

Katy Messick, who finished 1-for-3, hit an RBI double to score Wiggins. Caraway advanced to third base on an error.

Tori Bracewell then hit a sac grounder to score Caraway for an RBI to end the scoring for the Lady Tigers.

Wilson said his team’s “approach” to hitting has to change.

“We’ve got to change our attitude at the plate,” he said. “I really think it’s attitude. The way you approach the plate, the mind set is going to determine how successful you are up there.

“They’ve (Kinston) got a good pitcher (Sara Mock),” he said. “I’m not taking anything away from Kinston. She’s an experienced pitcher.”

Wiggins, who came in in relief for Messick at the mound, struck out all three batters in the top of the seventh inning to help give her team a chance to win.

Staughn’s first two batters struck out, Laken Harris bunted and made it to first base to put the tying run on and Wiggins reached on another slap single.

To end the game, Hannah Twitty grounded out at first.

Straughn will play at 5:45 tonight against Ariton, and at 8:30 against Kinston tonight in the City of Andalusia’s Department of Leisure Services annual fast pitch softball tournament at the Andalusia Sports Complex.

“We’ve got stiff compeition in the tournament,” Wilson said. “We’re going to have to approach it that way. There are some good teams in it. It’s going to be a battle each and every game.”

Due to the amount of inclement weather that swept through the area on Wednesday, temperatures dropped to the lower 50s and upper 40s Thursday night.

However, the lights were still on at Straughn’s softball field, where the Lady Tigers were practicing their hitting.