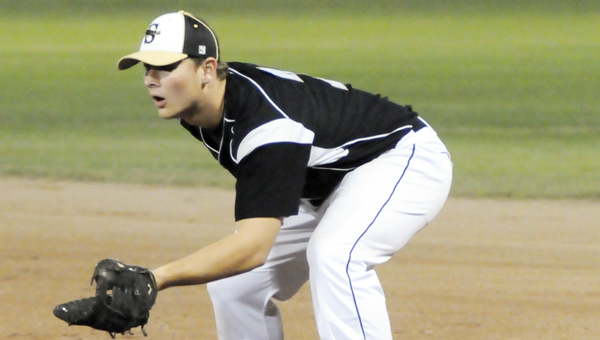 Straughn’s Nick Allen readies for the pitch at first base during an earlier game this season. The Tigers beat Dothan 7-3 and Dale County 5-3 Tuesday before hitting three three-run homers to beat Eufaula on Wednesday. | Andrew Garner/Star-News

Straughn cracked three three-run home runs out of the park in the bottom of the fifth inning, and beat Eufaula 10-6 Wednesday at the Southeast Invitational Tournament.

Before defeating Eufaula, SHS beat Dothan 7-3 and Dale County 5-3 on Tuesday in earlier pool play at the tournament.

With their 10-6 victory over Eufaula, fourth-ranked Straughn has won seven straight ball games, six of which were come-from-behind wins, SHS head baseball coach John Fussell said. Straughn will face the winner of the Enterprise-Carroll game on Friday, when the single elimination portion of the tournament begins.

Before embarking on a home run spree, SHS trailed Eufaula 6-1 going into the bottom of the fifth. Straughn scored one run in the fourth inning.

Fussell said he had a team meeting after the second inning, similar to what he did during the Dale County game Saturday during the SHS Invitational championship game.

“The good thing is that at least our guys know as long as they’re playing together as a team, and not being selfish and working hard, they’re in every game they play,” he said. “I would like for them to be hustling and focused when the first pitch is thrown. I think we’ll get that corrected, as a matter of fact, I’ll know we’ll get that corrected.”

In the bottom of the fifth, Andrew Burleson and Josh Dewrell were walked to put two men on with no outs.

Luke Fussell then hit the first three-run homer to make it 6-4.

By the time Dewrell hit the third three-run home run for Straughn, there were two outs on the board.

“We had a meeting after the second inning, and even though we didn’t score until the fourth, there wasn’t anymore sitting on the bench, just like the Dale County game,” Fussell said.

Two of the three home runs were hit on curve balls, and one was hit on a fast ball. By the time Fussell and Dewrell hit their home runs, they were 0-for-2.

Lunsford earned the win on the mound for Straughn. He gave up five hits, four walks and had two strikeouts in seven innings.

Straughn (12-3) trailed 3-2, and scored three runs in the bottom of the sixth to get the win over the Warriors.

Nick Allen gave up two runs and had two strikeouts in one inning for the win on the mound.

Stinson pitched five innings, gave up one hit and struck out two for Straughn.

Straughn again found itself behind, trailing 3-2 in the fourth inning. SHS tied the game up in the fifth inning, and scored four runs in the seventh.

Hughes hit a two-run home run, and the Nos. 6, 7 and 8 hole batters hit two singles and one double.