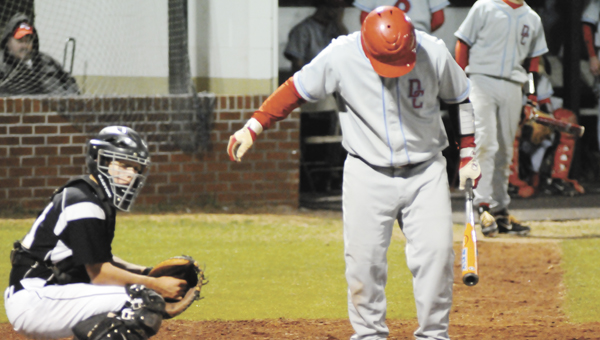 Straughn captured its 11th straight win, and second tournament title of the season Saturday with a 13-2 win over Wicksburg in the finals at the Southeast Invitational Tournament.

The Tigers’ run to the championship game included come-from-behind wins against Eufaula, Dale County and Dothan at the beginning of the tournament, which started last Tuesday.

Straughn went on to beat Enterprise 6-5 on Friday in the quarterfinals, and eliminated Headland with an 8-1 win Friday.

“We hit the ball real well, and made a lot of plays,” SHS head baseball coach John Fussell said.

The Tigers only committed four infield errors in the six ball games at the tournament, Fussell said.

“I thought our guys did a good job of staying focused,” Fussell said.

This Thursday, Straughn (15-3) will begin its area play when it will travel to play Ashford. Then on Friday, the Tigers will play host to the Yellow Jackets.

“Winning that tournament was great,” Fussell said. “But what it all boils down to is that area play begins Thursday.”

Straughn’s Zack Stinson earned the win for the Tigers on the mound. He gave up two runs on four hits, had one strikeout and no walks.

Allen struck out six batters, and allowed one earned run on two hits in four innings for Straughn to get the win.

Stinson came in, and pitched two innings, allowing no hits. He had three strikeouts.

Hughes earned the save, where he struck out two batters and allowed one hit in the seventh.

Straughn scored one run in the third inning, two runs in the fourth inning and five runs in the fifth inning.

In hitting, Dewrell, Hughes, Lunsford, Stinson and Turvin were 1-for-3 with one single each; and Allen was 2-for-4 and had a single and a double.

Straughn scored one run each in the first and second innings, two in the third inning and two in the sixth inning.

Straughn will travel to play Dale County today at 4 p.m.