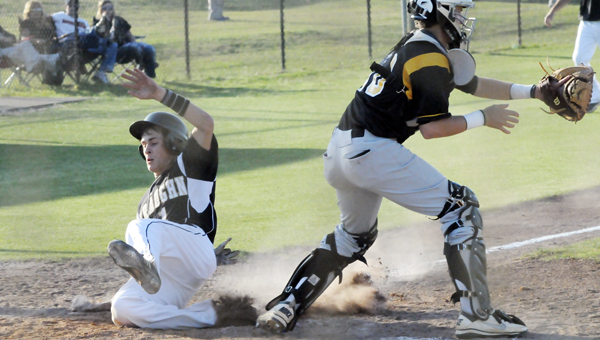 Straughn scored four runs in the bottom of the fourth inning, and held on late as the Tigers beat Ashford 8-4 Friday night at SHS.

The Tigers led 8-1 in the top of the sixth inning, but a three-run home run by Ashford’s Dylan Smith made things interesting for Straughn.

“When you’ve got an 8-1 lead in the sixth inning, you’re supposed to shut the door, especially when you bring in a new pitcher,” SHS head baseball coach John Fussell said when Nick Allen came in to relieve starter Josh Dewrell. “You want to play well behind him, and let him get some confidence.

“We just threw the ball around,” he said. “We didn’t hit our cut off man, and we made throws there was no sense in throwing.”

With this victory, the Tigers improve to 17-4 overall, and 2-0 in Class 4A, Area 3. The next area game for the Tigers will be next Thurs., March 31, where they will play host to Headland. The first pitch will be at 5 p.m.

Through five innings, Dewrell struck out five and allowed one run on five hits.

Ashford’s early run before the three-run homer came in the fourth inning on a sac fly.

In the bottom of the fourth, Straughn’s Luke Fussell got things going with an RBI triple to score Dewrell, who finished with a single and two runs for the night.

Straughn took an early 2-0 lead in the bottom of the first inning on an RBI from Hughes to score Dewrell, and an RBI from Stinson that scored Fussell.

Then, in the second inning, the Tigers added one run when Zack Turvin scored on an RBI double by Chase Short.

Fussell helped the Tigers take a 4-0 lead in the third inning when he scored on a sac fly by Stinson.

Allen pitched two innings, struck out two and allowed three runs on one hit for the save.

Given the fact that his team allowed Ashford to come back a little in the sixth, Fussell said he hopes his team will learn from this because of the area match ups against Headland next week.

“You play outs when you’re up by seven,” he said. “I hope that we get that fixed, and you think you could with this group of seniors because they’ll come back and bite you.

“We’re thankful to be 2-0 in the area,” he said. “I hope that just because we beat (Headland) in that tournament (Southeast Invitational), that we don’t take them lightly. They’ve got a good team, but so do we.”

Ashford’s Blake Ingram was 2-for-4.

Third-ranked Straughn will play Carroll-Ozark in a doubleheader Monday at 4 p.m.