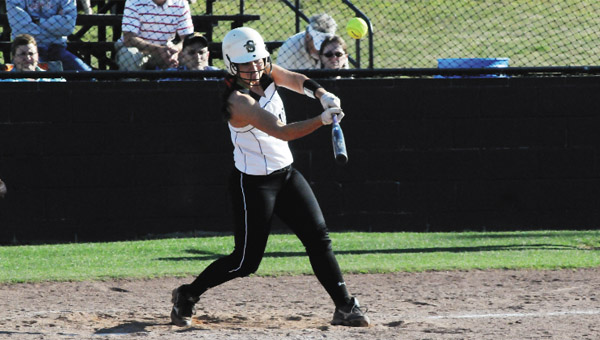 Straughn’s Tiffany Taylor gets a hit during the KLD tourney. Andrew Garner/Star-News

With the championship victory, the Lady Tigers have won 13 straight ball games, and improve to 14-4 on the season.

“It was a real competitive tournament, and I knew it would be,” Wilson said. “We had several close games, and the championship game came down to the wire. I think that everybody that came certainly got the chance to see some good softball.”
In the first game of the day, Straughn beat Flomaton 10-1 in the semifinals to advance to the championship game.

Pleasant Home beat Andalusia 6-5 in its first game of the day, and beat Opp 8-1 in the semifinals, after starting the day as the No. 3 seed coming out of pool play.
Red Level was eliminated from the tournament with a 10-0 loss to Flomaton.

Straughn 3,
Pleasant Home 2
The Lady Tigers (13-4) scored two runs in the first inning on a two-run home run by Paige Caraway, and then added one run in the fifth on an RBI single from Katy Messick to seal the win, and the tournament championship.

Wilson said his team had several opportunities to add to the lead in the game, but never could get the “clutch hits” when they were needed.

“We didn’t get those clutch hits that we’ve been getting to score in it,” he said. “We had bases loaded and one out, and we may have gotten one run. It was just one of those things where we couldn’t come up with a big hit to widen the lead any.”

Caraway struck out five and allowed one walk in five innings of work for Straughn. Kaitlynn Wiggins struck out three in one inning.

Pleasant Home (10-8) scored its two runs in the third inning.

Caitlin Jernigan had three singles and one run; Abigail Kelley had one double and one RBI; and Emily Byrd and Jordan McGhee had one single each.

“We gave up a home run to Paige, and we had one costly error in the field that gave them their third run,” PHS head softball coach Bradley Stephens said. “If we hadn’t of done that, it would’ve been closer that that.”

Emily Byrd struck out three and allowed one walk in 4.1 innings, and Brentin Fuller struck out two in 1.1 innings.

“Early, we looked really good,” Taylor said. “We played really well defensively. As the game went on, we had just a few errors, but they came at very costly times.
“That seems to be the short of it,” he said. “We had errors at costly times, and we didn’t hit the ball consistently.”

With the game tied 4-4, Pleasant Home scored two runs in the eighth inning on errors to knock Andalusia out of the tournament.

Andalusia scored one run in the third on an RBI double by Ellie Pollock to score Kelsey Ramirez.

The Lady Bulldogs added three runs in the fifth inning on a sac fly by Emily Terry, an RBI single by Jessica Park and an error.

Terry scored Andalusia’s fifth run in the eighth on a sac fly.

Byrd and Herman were 2-for-4 each; and Jernigan was 1-for-5 for the Lady Eagles.
Park, Pollock, A.C. Riley and Pugh were 1-for-4 each for Andalusia.

Statistics from the Straughn-Pleasant Home championship game were provided by Covington County Sports.

Upcoming games
Andalusia’s game today against Opp will be played at LBWCC, the Lady Bulldogs’ new home for softball.

Pleasant Home will travel to play Opp on Thursday, and Straughn’s game against Enterprise Monday night will be in Wednesday’s edition of the Star-News.

AHS softball games to be played at LBWCC