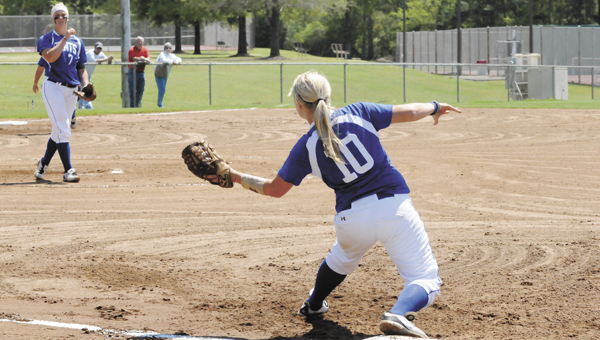 The Lady Saints’ pitching staff combined to strike out 10 batters and allowed three runs Friday afternoon to help lead LBWCC to a 2-1, 10-2 doubleheader sweep over Bishop State in conference play at home.

LBWCC improves to 6-4 in the South Conference, and will play Chattanooga Valley Community College in Phenix City tomorrow.

The Lady Saints hit two solo home runs to win the first game, and scored six runs on four hits in the sixth inning of the second game to claim the sweep.

Trailing 2-1 in the bottom of the fourth inning, the Lady Saints used small ball to get three quick runs on the board.

Courtney Lipford and Logsdon hit bunt-singles, and later scored on a two-run double by Ashley Gates.

Gates later came around on an RBI from Jessica Centner.

“We had to do something to get pressure on them,” McDaniel said about the fourth inning.

In the sixth innig, Logsdon led off with a single and advanced to second on a Gates put out.

Land and Bracewell later scored on an error at center field on a hit from Jessica Simms.

Lipford then hit a two-run home run with two outs to help the Lady Saints get the sweep.

The Lady Saints scored one run in the third inning on an RBI single from Amber Davis, who finished 1-for-3.

Holmes struck out four and allowed two runs on four hits in five innings for the win. Nelson struck out one and allowed one hit in one inning for the save.

Marvia Scott and Candace Stallworth were 2-for-3 each for Bishop State.

The Lady Wildcats scored two runs in the fourth inning off RBI singles from Shinaya McGill and Kimberly Anderson.

On defense, winning pitcher Logsdon struck out four and allowed one run on five hits in the complete game.

Trailing 1-0, Bracewell hit her solo shot on an 0-2 count in the sixth inning, and Gates followed in the seventh on the first pitch.

Bracewell, Simms, Heather Brinkmeier and Gates were 1-for- each for the Lady Saints. Centner was 1-for-2.

Katie Belue was 1-for-3 and Anderson was 2-for-4 for the Lady Wildcats.

Andalusia’s boys and girls tennis teams fell to L.A.M.P. in Montgomery Thursday. The Bulldogs 7-2 in boys action, and the Lady... read more