Manor to celebrate 20 years of family 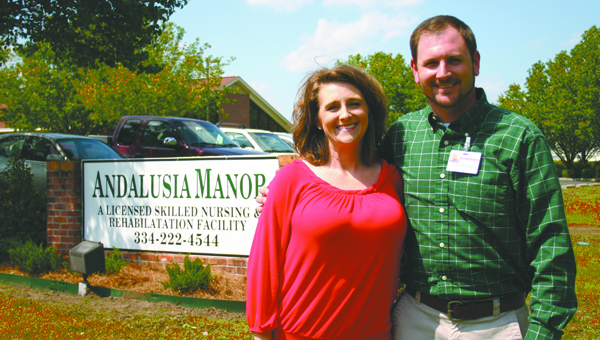 When their father cut the ribbon and opened Andalusia Manor on April 2, 1991, his children were not allowed to attend.

“It was a Monday,” Sal.Lee Sasser-Williams said. “We didn’t miss school for anything. Stallion and I had perfect attendance from kindergarten on.”

But the siblings have missed little since that time. Even in those days, they helped out in the family’s business.

“I remember putting the numbers on the doors when the Manor was built,” Stallion Sasser said.

Andalusia Manor was their father’s vision, and one they begged their mother to keep for them when Dale Sasser died in an automobile accident 18 months after the Manor opened.

“He died on Oct. 21, 1992,” Sal.Lee said. “He was in a car wreck, coming home from Montgomery where he was working on a deal with a partner for another nursing home.

“Daddy was the type person who always came home,” Sal.Lee said. “He was with us. Family was first with him.”

“I didn’t know this until many years later, by mother told me he always opened our doors and checked on us when he got home,” Stallion said.

“He was a family man,” Sal.Lee said. “But his second love was the elderly. It was certainly his legacy that we would be caring for the people who took care of us.”

When their father died, their mother, Sheila Horn Sasser, had an opportunity to sell the family’s business, which also included other nursing homes.

“I have to give props to my mama,” Sal.Lee said. “She had the opportunity to sell. But she knew mine and Stallion’s hearts were here. We asked her to give us time to get through school.

“She kept Daddy’s dream for us,” she said. “There were a lot of sacrifices involved, and we were blessed to have a wonderful mother.”

The siblings said the family owes debts of gratitude to David Dennis, who managed the business after their father’s death, and Dan Maples, who was and still is the accountant.

“He is one of the best people I have ever known,” Sal.Lee said. “He really stepped up to the plate and helped out.”

Sal.Lee’s first job at the nursing home was filing. She was 12. She has worked as an administrative assistant, in activities – every department except as an RN, she said. She is now the director of operations for Sasser Enterprises, which includes Savannah Terrace, the assisted living facility located next door to Andalusia Manor.

Stallion’s first job was when he was 8, working in the yard. When he was 14, without his mother’s knowledge, he applied for a summer job in maintenance.

“Pat Henagan called Mother and said he had to hire me because I interviewed well,” he recalled. That summer the Brantley native lived in Andalusia with his sister and worked. He’s also worked as an administrative assistant, and in human resources. Now, Stallion is assistant administrator at Andalusia Manor.

Just as the two of them have “grown up” with Andalusia Manor – celebrating it’s 20th anniversary this weekend – they’ve watched employees do the same.

“Trece was a CAN who worked while she was in nursing school and eventually became the director of nursing,” Sal.Lee said. “She knows this business from the bottom up. She’s an inspiration.”

And Mays is just one of a large group of employees to whom they refer as “wonderful.”

This week, staff members have been busy getting ready for tomorrow’s anniversary open house.

“Thursday, three RNs stepped up and painted a nurses’ station,” Stallion said. “We’ve got some ladies who have planted flowers and weeded the beds. They are phenomenal.”

It’s all part of a plan to make a home for the residents. Nationally there is a move for this culture change. The Sasser family has believed this all along.

“Our dad instilled in us that a nursing home should not be institutional,” Sal.Lee said. “We are talking care of our friends, family and neighbors. We’re taking care of the people who took care of us.”