Straughn looks ahead to future 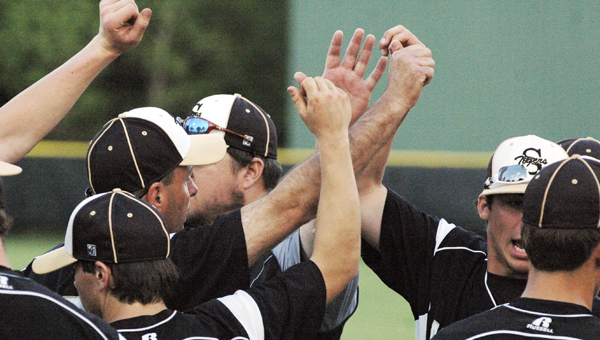 More than two weeks ago, top-ranked Straughn won the area championship in its area series sweep over Headland.

Last week, the Tigers fell in their area series to rival Andalusia, falling in the tiebreaker game 3-0 Friday night.

Head coach John Fussell, sitting in the old home side dug out at the SHS baseball field, said the team learned a lot about itself during the regular season area play.

The Tigers finished the regular season area with a 5-1 record, which only includes the first two games of each series.

Straughn swept Ashford and Headland in two games each, and Fussell said pitching and defense were executed well in those series.

“Against Ashford, we pitched real well, and we played good defense, and we hit the ball,” Fussell said. “I think we scored eight or nine runs in both of those games. Then, against Headland, when we played them here, the pitching and defense was real good. We scored eight runs, but the hitting even in that game was kind of spotty.”

In the first game against Andalusia, Straughn lost 9-0, and then came back the next night to win the second game of the series 6-1.

Fussell said in the first game, the pitching didn’t come around to suit the team despite the defense only committing one error and leaving 10 men on base.

“I’m just going to be real honest, we didn’t pitch real well,” he said. “We threw the ball in their face, and they had been hitting the ball.”

In both, Fussell said the Tigers didn’t have a problem hitting the ball.

“We were crushing the ball 1-9,” he said. “Our No. 9 hole hitter hits the ball out of the ball park just like our No. 1 hitter. People don’t understand, hitting’s streaky. We’ve just got to get back to hitting the ball 1-9 in the line up.”

That’s the main thing Straughn has learned this season is being more consistent behind the plate, Fussell said.

Now that Straughn is in the Class 4A playoffs, the Tigers will play host to the runner-up of Class 4A, Area 4 in the first round. The runner-up will either be St. James or Brewbaker Tech, which play each other this Thursday and Friday.

Fussell said he has noticed that a lot of players are looking toward the future, lately.

“Their attitude’s been great,” he said. “Their work ethic has been good. I think they see the big picture. They were disappointed that they didn’t win the series against Andalusia, but they see the bigger picture. Hopefully, we’ll take care of business when it matters the most.”

This week, the Tigers will play host to Brantley today in a single game that might turn into a doubleheader for senior day.

On Thursday, Straughn will travel to play Wicksburg, who they played in the finals of the Southeast Invitational, in a doubleheader.

After that, Fussell said the team will take a few days of rest.

They’re going to need it, because playoffs are right around the corner.