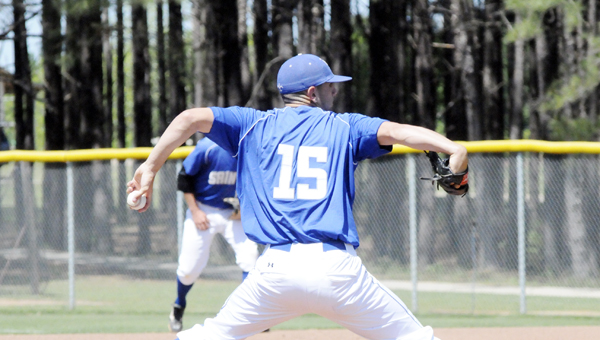 With the victory, the Saints improve to 21-18 overall, and 12-10 in the ACCC South Conference.

Helms added the team needs to win six more conference games to be a contender in the playoffs.

“(This win) keeps us in the middle of the playoff race,” he said. “We have eight conference games left, and I feel we have to win at least six of them to have a chance.”

The Saints got things going in the second inning on a solo homer by David Carter, and took an early 1-0 lead.

LBWCC added one run in the third inning on an RBI single from Luke Miller to score Gavin Free of Opp.

In the bottom of the fourth, Thompson of Opp, hit Andrew Crane home to start a three-run inning for the Saints.

Haag, of Andalusia, then hit a two-run double to score Paul Hattenstein and Thompson to help LBWCC take a 5-1 lead.

Helms said in the fourth inning, the players “executed” the best during the game.

“We executed a few things,” he said. “We had some opportunities to open the game up, and didn’t execute, which has been our downfall with these freshmen. They’re not sure of themselves. But, at the end of the day, they found a way to get it done.”

Winning pitcher Daniel Arant allowed one run on two hits and struck out four in four innings for the Saints. Matthew Barber got the save with one strike out in two-thirds innings.

Jeff Davis added one run in the fifth inning when Jordan Creel scored on a Saints error.

The Saints had five errors in the ball game — two of which came at a costly time in the seventh inning.

Behind the pitching of Clark Grey, Chad Wallace and Barber, LBWCC found a way to win in the last five innings of play.

The Saints added three runs in the bottom of the eighth inning on RBIs from Free, Thompson and Haag.

LBWCC will travel to face Wallace State in Dothan this Sunday.