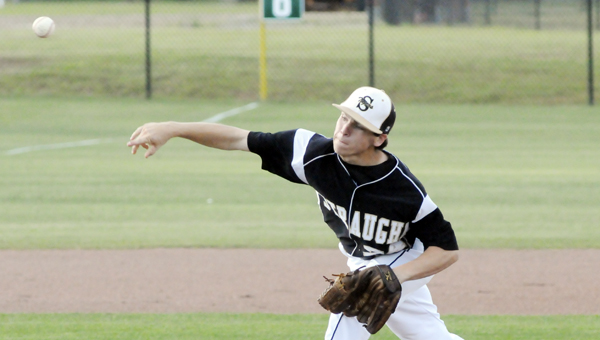 Straughn's Zack Stinson, one of the Tigers' nine seniors, will try and help lead his team to a first round victory over St. James in the playoffs Friday night. | Andrew Garner/Star-News

Straughn is more than 24 hours away from making its third straight playoff appearance, and its nine seniors are anxious to get on the field to try and help lead the Tigers to a victory.

The Tigers enter the first round of the Class 4A state playoffs with a 25-7 record, and will a face St. James team that has compiled a 22-8 record on the year.

The last two seasons in the first round of the playoffs haven’t gone well for the Tigers. Straughn lost to Headland in 2009, and to Dale County in 2010 while in Class 3A.

With this being the third trip to the playoffs, the seniors said they are a more “experienced” team, which is the difference.

“I think that we’ve got a lot more experienced guys that have been there in that situation,” Lunsford said. “I think we can get it done.”

The other day, SHS head baseball coach John Fussell gave the team a scouting report on the Trojans, and the seniors said St. James’ best asset is its ability to hit the ball.

“We’re not saying we can’t beat them,” Hughes chimed in. “We’re just going to do what we do to play baseball.”

Fussell, along with SHS assistant baseball coach Kenny Skipper and Luke went to watch St. James play Brewbaker Tech Saturday in the area series to see who they’d play in the first round.

Luke said defensively, the Trojans are a good team.

“They’re just a well-rounded baseball team,” Luke said. “If we don’t play what we’re capable of playing, then they can beat us.”

When asked what the keys are for the Tigers in tomorrow’s games, the seniors collaborated on the answer and agreed that “execution” is the main thing.

Straughn and St. James will play the best-of-three series in the first round of the playoffs. There will be two games played on Friday, and one game on Saturday, if necessary.

On the prospect of making it past St. James, and advancing to the second round, Allen said the team is aware of the “challenge” that lies ahead.

“Well, we definitely have a challenge,” Allen said. “We’ve just got to come together as a team and play to our capabilities.”

And playing to their capabilities has been something the seniors said their coach has been stressing to them this week.

After losing their area series to rival Andalusia, the seniors said it forced them to realize that when they play their best baseball, they can beat just about anybody.

“It was kind of a wake up call because anybody can beat anybody on any given day,” Dewrell said. “We feel like when we’re playing our best, there’s not a team in 4A that we can’t beat.”