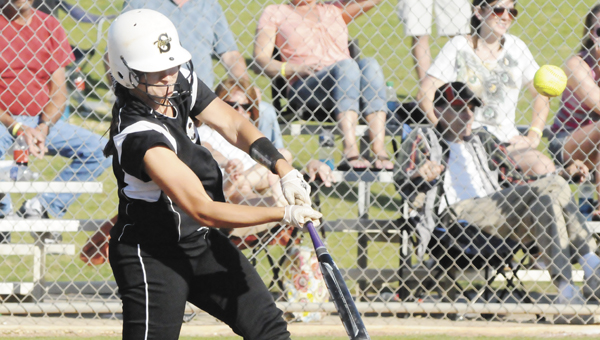 Straughn’s Tiffany Taylor hit a two-run single in the seventh inning to help lead the Lady Tigers to a 7-2 area win over Headland Thursday. The Lady Tigers are tied in first place with Ashford. | Andrew Garner/Star-News

Straughn scored three runs in the seventh inning to put the game out of reach, and the Lady Tigers beat Headland 7-2 in area action Thursday night.

The Lady Tigers held a 4-2 lead going into the seventh inning in which Tiffany Taylor hit pay dirt on a two-run single, and Katy Messick hit a sac fly to score the three runs.

“The hitting got kind of contagious,” SHS head softball coach Ray Wilson said. “When one hits, they all seem to follow. It was a big win.”

With this victory, the seventh-ranked Lady Tigers improve to 29-8 overall, and 5-1 in Class 4A, Area 3. Additionally, the win brings Straughn in a two-way tie with Ashford for first place in the area.

Headland’s Kathryn Drew hit two solo home runs for the Lady Rams. Drew’s first home run came in the first inning, and then tied the game up in the fourth inning with her second solo homer.

The Lady Tigers took a 4-2 lead in the sixth inning on an RBI double from Tori Bracewell to score Twitty, and a sac fly from Payton Mitchell that scored Bracewell.

Straughn took its lead of the contest in the third inning when the Lady Tigers scored two runs with two outs on two hits.

“I was proud of the way we fought back,” Wilson said. “They took the lead, we got the lead back and they tied us up.

“We kept fighting and found a way to win,” he said. “They made one or two errors that helped and we also had big hits that scored some runs.”

Wiggins led off with a single, and stole second base. Harris doubled Wiggins home, and then Messick singled Harris home to help her team take the one-run advantage.

SHS girls fall to No. 7, boys still at top

Straughn’s Lady Tigers fell to No. 7 in the latest Alabama Sports Writers Association poll that was released today. The... read more