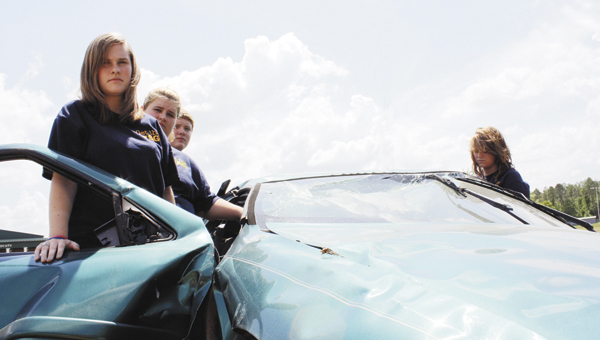 The message implied by the mangled Chevrolet Cavalier sitting in front of Florala High School was simple – don’t text and drive.

On Monday, Rusty Fine explained to the FHS student body how he knows firsthand the dangers of texting while driving. Fine’s niece, 18-year-old Megan War-man, was driving the car on Jan. 27, when she ran off the road on Florida’s State Road 85 near Niceville, over corrected and flipped six times.

“When I look out on a crowd like this, I see Megan,” Fine said. “She was just like you. She had her whole life ahead of her. She was smart, an athlete. She wasn’t drinking and driving. She was texting and driving, and she died because of it.”

Since Warman’s death, Fine has been traveling throughout Florida and Alabama spreading his message. Warman was a senior at Crestview High School. She and her brother had lived with Fine and his wife for the last 10 years. He said he thought of her not as his niece, but as his daughter, and he hopes to stop at least one person from texting and driving with his demonstrations.

Fine opened his presentation with a video spot sponsored by the cell phone company, AT&T. In it, it tells the stories of lives impacted by the practice of texting while driving.

He said Warman, who was having three text conversations simultaneously at the time of her accident, could have been featured since her story was so similar to those in the video.

“This is the thing, she didn’t get a smartphone until she turned 18,” he said. “From what we can tell, her front tire ran off on the side of the road, hit the soft sand. She tried to correct, but it didn’t work. An eyewitness said she just flipped and kept rolling.

“Why? All because she was texting while driving,” he said.

Statistics show that one is 23 times more likely to be involved in an accident if texting while driving.

Earlier this month, the Alabama House of Representatives voted to make it illegal to send text messages while driving.

Thirty states, the District of Columbia and Guam ban text messaging while driving, according to the National Highway Traffic Safety Administration.

The legislation would make it illegal to send a text message, email or instant message while driving. Voice-operated text messaging would be exempt from the ban. The bill levies a $25 fine for the first offense, $50 for the second offense and $75 for the third. An offense would put two points on a motorist’s driving record.

The bill must go before the Senate.

But for now, drivers – both teens and adults – should take it upon themselves to practice safe driving habits regarding texting, Fine said.

“Statistics show that 1 in 5 people send messages while driving,” he said. “It’s not just teens, either. It’s everyone. It’s an epidemic. It will kill you.”

“Mr. Fine was able to put a real face on a real problem, and I hope our students pay attention to the message,” Clark said.