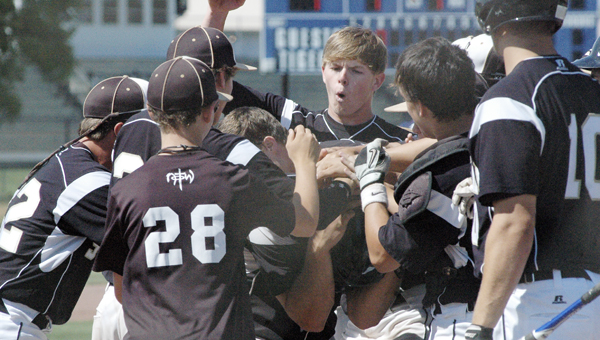 Straughn entered Saturday’s game with one goal in mind — to win.

The Tigers did that, forcing the mercy rule and beat St. James 15-4 to claim the first round of the Class 4A state playoffs at SHS.

On a hot and sunny afternoon, the Tigers fell behind early when St. James’ Graham Norwood hit a two-run homer in the top of the first inning.

Straughn answered back in the bottom half of the inning scoring one run on an error.

The Tigers opened the game up in the third inning scoring nine runs on six hits and three errors to put the game out of reach for the Trojans.

SHS head baseball coach John Fussell said it feels good to advance after five consecutive years of not making it past the opening round of the playoffs.

“We were down 2-0, and we didn’t score but one run,” Fussell said about the first inning. “(The players) just kept on pumping each other up and started hitting the ball.

“St. James has got a good team,” he said. “Now, we’ve just got to get ready to play Headland.”

With this victory, the Tigers improve to 27-8 overall and advance to the second round of the Class 4A state playoffs. Straughn will play host to the Rams this Friday in the best-of-three series.

The last time the Tigers faced the Rams took place during area play in the regular season. Straughn won the series in two games after a thrilling 2-1 victory, and 11-inning series decider.

“Even though we’ve played them before and beat them, we’ve still got to play our game,” Straughn senior Josh Dewrell said on playing Headland again. “Anybody can beat anybody on any given day.”

The Tigers’ nine-run third inning began when Luke Fussell reached on a walk, and scored on an RBI single from Cody Hughes to tie the game at 2-2.

Nick Allen reached on a double and later scored on an RBI single from Drew Jones, Hughes came around on an error to help Straughn take a 4-2 lead.

Then courtesy runner Johnny Owens scored on an error, Zack Lunsford reached on a single and later scored on a wild pitch.

Zack Turvin reached on a walk and courtesy runner Doug Mosley scored on an RBI double from Dewrell.

Courtesy runner Jacob Ganous scored on an RBI double from Fussell to make it 8-2, and the last two runs of the inning came on a two-run homer by Allen.

“That’s a great baseball team,” St. James head baseball coach Keith Lucky said. “They hit the baseball really well, no doubt about it. When you kick the ball around on defense, and they can hit it well, it’s just going to have the snowball effect — that’s what happended today.

“We got them on a role with a few errors we made (Saturday), and they started stroking it,” he said.

Straughn added five runs in the bottom of the fourth inning on a two-run homer by Turvin; a two-run single by Fussell; and an RBI double by Hughes.

St. James scored its last two runs in the fifth inning on a two-run homer by Taylor Poe, who finished 1-for-3 with one home run and two RBIs.

William Osley was 1-for-1 with a single for St. James.

Fussell said the team will “not” play like it did last Friday in the first game of the series, where the Tigers lost 10-5 to the Trojans.

“They’re playing for a higher cause,” Fussell said. “They want to glorify the Lord in everything they do.

“Win or lose, we’re not going to come out and play a baseball game like we did in that first game,” he said. “If we get beat, then we’re going to get beat playing with emotion. We came out flat, and that won’t happen again.”

Elba tournament prep round up