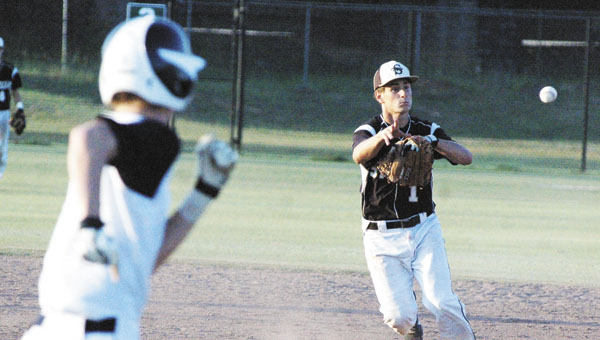 Straughn’s Luke Fussell (1) throws a runner out at first during the first game of the second round in Class 4A state playoffs Monday at SHS. Fussell hit a solo home run in the second game right after a three-run shot by Josh Dewrell to help lead the Tigers.| Andrew Garner/Star-News

Straughn advanced to the third round of the Class 4A state playoffs for the second time in school history Monday night with a doubleheader sweep over Headland at SHS.

The top-ranked Tigers beat the Rams 10-2 in the first game, and won the night cap 11-1 in a five-inning slugfest.

With the second round playoffs victory, Straughn improves to 29-8 overall, and will travel to face Oak Grove this Friday in the quarterfinal doubleheader. There will be a third game on Saturday if necessary.

Straughn’s Josh Dewrell and Luke Fussell hit back-to-back home runs in the top of the second inning, and Drew Jones added a grand slam home run in the fifth to help lead the Tigers to the second game win.

“It was just right where I wanted it,” Jones said about his grand slam. “I knew I had to come through for the team.”

Dewrell said once he saw the opportunity to hit the ball a long way, he took it.

“I knew (Singleton) had to come back with a curve ball, and he did and he hung it; and I hit it over the fence,” Dewrell said. “I wasn’t trying to press. I was just staying focused.”

Leading 1-0, Zack Stinson led the second inning with a walk, and Zack Lunsford followed with a single.

Two outs later, Dewrell connects on a 2-2 pitch and sent the ball over the left field fence for the first home run.

Fussell’s solo homer came on a 3-0 count, and gave Straughn a comfortable 5-0 lead.

In the fifth inning, Jones’ grand slam home run put the game well out of reach for the Rams, who finished the 2011 season 18-12.

“When they won that first one and got a little momentum, it made them that much better,” Headland head baseball coach Seth Nolen said. “We didn’t play well enough to win, and they played well enough to beat us. They earned every bit of it.”

The Tigers got on board in the first inning on a sac fly by Cody Hughes that scored Fussell, who was 2-for-4.

Straughn added one run in the fourth inning on a sac fly from Chase Short that scored Lunsford.

Stinson scored the last run for the Tigers on a passed ball from losing pitcher Hunter Singleton, who struck out two while allowing 11 runs on nine hits.

Dewrell got the check mark in the win column for Straughn. He struck out seven and allowed one run on two hits in five innings.

Headland’s Jace Johnson and Kyle James had one hit each for the Rams.

Stinson struck out five and allowed two runs on four hits to help the Tigers to the first game win.

Headland drew first blood in the top of the first inning when Daniel Jones batted two runs in for the Rams.

The Tigers came back to score two runs each in the second and third innings to take the go-ahead lead.

Straughn’s two runs in the second came on an error, and a ground out to the short stop that scored Jones and courtesy runner Jacob Ganous, respectively.

The Tigers took the lead with a solo homer by Dewrell.

The last time Dewrell hit two home runs in one day was at the Southeast Invitational Tournament.

Straughn’s fourth run of the game came at the expense of another Headland error that scored Hughes from third base.

Turvin and Short, who were 3-for-4 for the Tigers, led the fourth inning with one single each.

Dewrell knocked in Turving on a sac ground to second, and Short came around on another error.

Fussell later scored in the inning on a passed ball to help Straughn take a 7-2 lead.

The Tigers added one run in the fifth inning, and two runs in the sixth on seven hits to seal the win.

Hughes came in and struck out three in one inning to earn the save for Straughn.

Stinson and Hughes were 2-for-4 each; Dewrell, Allen, Jones and Lunsford were 1-for-4 each.

Singleton, Jones, Johnson and Hunter Rainey were 1-for-3 each for Headland.

Straughn’s Katy Messick throws to first base on a put out as Paige Caraway ducks for the throw. | Andrew... read more