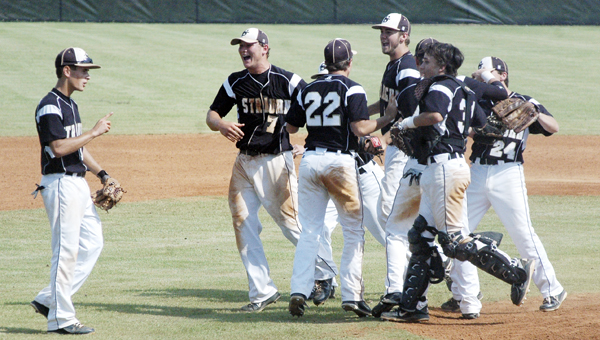 BESSEMER — Trailing in a baseball game is nothing new for Straughn.

In a game three, win-or-go-home situation, the Tigers trailed 3-0 in the first inning, but answered with six runs in the fourth to walk away with a 12-8 third-round playoffs victory Saturday over Oak Grove.

Top-ranked Straughn (31-9) will travel to play UMS-Wright this Friday in the semifinals of the Class 4A state playoffs in Mobile.

The Tigers’ journey to Bessemer included a 2-1 series win over St. James in the first round, and a second-round sweep over Headland only a few days earlier in the second round.

Straughn head baseball coach John Fussell said a key out Zack Lunsford made in center field was huge in the win.

“To me, that was sort of the spark that I think we needed,” Fussell said. “If he doesn’t make that catch, they score two runs and are up by two.”

Hughes said the pitch helped his game on the mound.

“Just getting out knowing your defense has your back, and Zack Lunsford making that diving play — that was big,” Hughes said. “That got me pumped up.”

Nick Allen and Cody Hughes had three RBIs each, and both contributed on the mound to lead the Tigers to the win.

Allen, normally a consistent hitter for Straughn, only had two hits in the first two games on Friday. He finished 4-for-4 Saturday in the third game.

When asked what sort of adjustments he made at the plate, Allen said he went back to the basics.

“I didn’t hit real well Friday,” Allen said. “So Saturday, I went up there thinking ‘going back to the basics — hitting like I’ve been hitting all year — just don’t press.’”

Hughes hit his first RBI in the third inning to score Allen to tie the game at 3-3.

In the fourth inning, Lunsford reached on an error to lead Straughn, and Zack Turvin and Chase Short hit bunt-singles to load the bases.

With Josh Dewrell at bat, Oak Grove’s John Vining overthrew at first base to score Lunsford.

Luke Fussell walked to load the bases again, and Turvin came in on a passed ball to help Straughn take a 5-3 advantage.

On a 3-0 count, Allen hit in his first two RBIs on a double to score Short and Dewrell to force a meeting at the pitchers’ mound for Oak Grove to re-group.

With a 7-3 lead, the Tigers added their last two runs on Hughes’ two-run single to score Fussell and Allen.

“Our team was just pumped up,” Hughes said. “Our concept (in the fourth inning) was that if the ball’s in the strike zone, you’ve got to hit it.”

In the top of the fifth inning, Oak Grove scored two runs on a solo home run by T.J. Bartley and an RBI double by Vining, who finished 2-for-3.

Straughn scored its last three runs in the fifth inning on RBI singles from Fussell and Allen, and on a passed ball.

Oak Grove kept things interesting for Straughn in the top of the sixth inning, scoring three runs on three hits.

Matthew Bowden hit a two-run homer, and Christian Harper had an RBI on a sac fly for Oak Grove in the sixth.

“Sometimes you make all the plays, and sometimes you miss a few,” he said. “The ones we missed today kind of hurt us a little bit. Our kids play hard, and they played to the last pitch. My hat’s off to Straughn. They did what they needed to do to win, and I wish them the best of luck in the next round.”

Hughes allowed four earned runs on nine hits, and struck out three to get the win for Straughn on the mound. Allen earned the save.

“I thought, defensively, we were pretty sound,” Fussell said. “We had a few times there where we threw it around too much. A big out was in the top of the seventh where (second baseman) Luke (Fussell) made the first out. To me, the first out in the seventh inning was also big.”

Straughn would also make the last out of the game at second on a ground out.

Straughn scored two runs in the bottom of the first inning on a single by Drew Jones and an error.

Vining and Bartley were 2-for-3 each; and Harper and Bowden were 2-for-4 each for Oak Grove.

Straughn will play UMS-Wright in two games on Friday at 5 p.m. and 7 p.m. A third game at noon on Saturday will be played, if necessary.

Rolling to the semifinals

Straughn’s Cody Hughes was one of two players that had three RBIs in today's third round, third-game win over Oak... read more