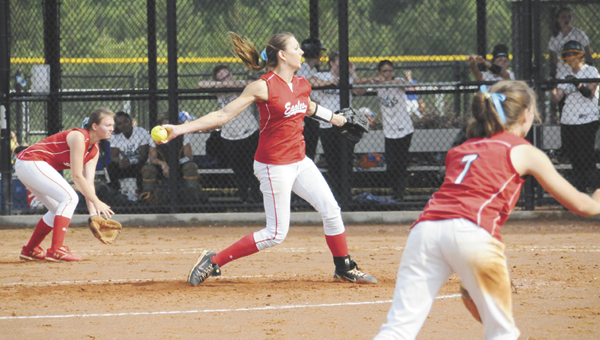 Pleasant Home’s Brentin Fuller earned the win during the second game of the day. Fuller pitched eight innings for the Lady Eagles.

The Lady Eagles beat former area opponent Florala 12-0 in five innings in the first game, and defeated Fruitdale 8-2 in the second game to advance in the winners bracket.

“I don’t know if we extended a lot of energy in that first game trying to beat Florala,“ Pleasant Home head softball coach Bradley Stephens said, “but we started off kind of sluggish in the second game, and we really picked it up there a little bit.”

The regional tourney is a double-elimination event.

Pleasant Home’s Abigail Kelley was 3-for-4 with a triple and a three runs to help lead the Lady Eagles over Fruitdale.

Brentin Fuller, who pitched eight innings total for the Lady Eagles on day one, earned the win, racking up eight strikeouts.

Pleasant Home scored two runs in the first inning, and with the game tied 2-2 in the fourth, the Lady Eagles added one run and sailed from there.

Adding three runs on four hits in the top of the fifth inning put the game out of reach for Fruitdale.

Kelley’s triple in the top of the sixth helped Pleasant Home add its final two runs on the board.

Pleasant Home scored eight runs in the first inning, and added four runs late to walk away with the 12-run win in five innings over Florala.

Byrd pitched two innings and allowed no runs on no hits to earn the win for the Lady Eagles.

Brentin Fuller came in and allowed no runs on one hit to get the save.

In the first inning, Jernigan and Kelley reached on walks.

Copeland, who finished 2-for-3 with two RBIs, hit an RBI double to drive in the first run.

From there, Kelley scored on an error, and Copeland and Weaver scored on RBIs from Weaver and Byrd.

Florala’s only hit of the game came when Alma Caffy hit a single in the top of the fourth inning.

Pleasant Home added one run in the bottom of the second on an RBI single from Cook, and added three runs in the third on a sac fly by Copeland, an error and a wild pitch.

Jernigan, Weaver, Byrd and Brookshire had one RBI each for the Lady Eagles.

Straughn's Katy Messick tries for a tag at third base during play at the regional tournament Friday GULF SHORES —... read more