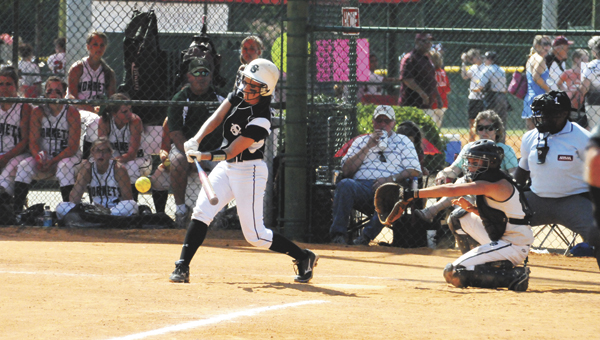 The Lady Tigers ended their 2011 winning season, falling to defending state champion Ardmore 9-1 in an elimination game in the Class 4A state softball tournament at Lagoon Park.

What the seniors have cause to celebrate, despite the loss, is a four-year, 151-49-1 record.

“They’ve won a lot of ball games, and have done some amazing things,” SHS head coach Ray Wilson said. “There have been some groups ahead of them that have been a part of that. It’s just been a pleasure for me to have the opportunity to work with them.

“I’ve learned a lot from them, and I just hope maybe they’ve learned something from me,” he said. “They will be greatly missed.”

Straughn dropped down to the elimination bracket in a 3-0 loss to Dallas County in the second game of the winner’s bracket.

The Lady Tigers started their day with a 9-1 victory over Central-Florence.

Ardmore scored six runs in the top of the fifth inning to run away with the win.

Emily Faulkner led Ardmore, going 2-for-3 with a double.

Straughn scored its lone run in the bottom of the fourth inning on an RBI single from Tiffany Taylor that scored Paige Caraway.

Kaitlynn Wiggins, Kari Biggs, Katy Messick, Caraway and Taylor had one hit each for Straughn.

Ardmore scored one run in the first inning to take an early lead, and added two runs in the third.

Brittany Bowen and Faulkner scored two runs each for Ardmore.

Kelsey Gilbert allowed one run on six hits and struck out five.

Dallas County’s Cassie Daniels took control of the game from the start, and she let Straughn know it.

Daniels allowed no runs on three hits and struck out seven, and the Lady Hornets scored three runs on two singles and an error to advance in the winner’s bracket Thursday.

After the Lady Tigers took a 1-0 lead in the third inning, Daniels only allowed 14 batters to the plate for the rest of the game, not going over three balls in the count.

In the fourth inning, Dallas County added one run with the bases-loaded on an error.

“They started hitting a little bit, and we started making some errors in crucial situations there,” Wilson said. “They’re a good team — a good solid team. It got away from us there. I was proud of us for keeping our composure. We still played hard to the very end.”

The last time Straughn was in this position at the state tournament was in 2010 in Class 3A, where the Lady Tigers fell in the second to Dadeville 4-1 before getting knocked out of the tournament in a 3-2 loss to Elkmont.

Wiggins was 2-for-3 with two singles, and Messick was 1-for-3 with one single for Straughn.

Whitney Denson, Daniels and Kendall Veach were 2-for-4 each for the Lady Hornets. Ariel Atkinson was 2-for-2.

The Lady Tigers scored five runs in the top of the fourth inning, and mounted a solid pitching game in the opening game win.

Caraway struck out seven and allowed one run on six hits in six innings to get the win for Straughn in the circle.

Straughn struck first in the top of the second on an RBI single from Wiggins, who was 2-for-5 with one run and two RBIs.

The Lady Tigers led off the fourth inning with a walk by Tori Bracewell, who advanced to second base on a ground out by Tiffany Taylor and made it to third on a passed ball.

Kelli Wilcox then reached on a single, and the Lady Tigers loaded the bases on an RBI single from Payton Mitchell that scored Bracewell.

With the bases still loaded and two outs, the Lady Tigers called a squeeze play with Wiggins at bat that forced a throwing error by the catcher, and allowed Wilcox to steal home to put Straughn ahead 3-1.

Mitchell then scored on a single by Wiggins; Wiggins scored on a hit by Messick; and Laken Harris, who reached on a walk, scored on an error to end the scoring drive for the Lady Tigers.

Straughn put the dagger in the heart in the top of the fifth, scoring two runs on a hit-by-pitch and a walk with the bases loaded.

Central-Florence scored its only run in the top of the second on an RBI single from Andi Kimbrough.

Straughn added one run in the top of the sixth on an error at second base.

Straughn fell to Dallas County 3-0 in the second game of the Class 4A state tournament today in Montgomery at... read more