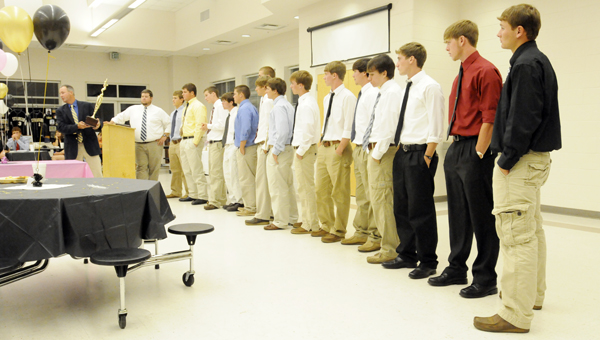 The Tigers finished their season with a 31-11 record, as the No. 1 ranked team in Class 4A and a trip to the semifinals of the state playoffs.

The Diamond Dolls were recognized, and thanked for their service this year.

“I can’t tell you enough about these Diamond Dolls,” Fussell said. “They did a great job. We couldn’t do all of the things we did without them.”

Rodger Daniel, SHS head junior varsity coach, recognized each player on the JV team and each received a certificate of achievement.

The JV baseball team finished its season with a 20-8 record, and beat Andalusia and Opp 4-out-of-6 times each.

“They never gave up,” Daniel said. “It was an honor to coach them.”

Fussell began the varsity portion of the banquet by thanking the parents, coaches and all of the support staff for their efforts this season.

Each varsity baseball player received a plaque before the special awards were given to select players that excelled in their respective area of the sport.

“What they have done and the lives they have touched has been truly tremendous,” Fussell said about the team. “I hope that what we’ve taught them will help them in all of their endeavors.”

The Hitting Award went to the two players who hit the best on the team. The champion hitter was Nick Allen, and the runner up was Zack Turvin.

The Slugger Award went to Josh Dewrell, who batted a .296 with 13 home runs.

Additionally, Dewrell won the champion pitching award, finishing the season with a 11-3 record on the mound. The runner-up pitching award went to Zack Stinson, who was 10-3 this year.

The Tiger Pride Award went to Cody Hughes for the presence he made in the classroom and on and off the field.

Straughn fell to Dallas County 3-0 in the second game of the Class 4A state tournament today in Montgomery at... read more