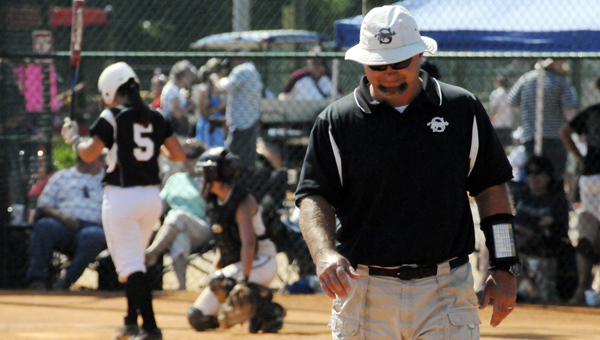 After seven years as Straughn’s head softball coach and four state tournament appearances, Ray Wilson has decided to step down as head coach to spend more time with his two sons, Ethan and Jake.

“I don’t really get to see them play during the spring and work with them during the spring,” Wilson said. “I felt like I’m not giving them justice — it’s surely not anything because of softball — I just feel like I needed to spend more time with them.

“Those are days and moments that you can’t go back and see again,” he said. “I don’t want to regret not having that opportunity one day.”

Before Wilson arrived at Straughn in 2005, he coached 10 years at Opp High School as the head baseball coach and assistant football coach.

His first time to coach a female sport came at SHS.

“It was the first time I coached any female sport,” Wilson said. “It took me a little adjusting. I still don’t think you can change the way you coach. You still know what you want out of them, and you strive to get it.”

Senior catcher Tiffany Taylor said adjusting to a new coach was easy when Wilson came to the school.

“We kind of took to his personality,” Taylor said. “He was always calm, and didn’t show much emotion and the longer we played with him the more we acted that way.”

Katie Beck, another senior, said Wilson helped teach the team how to have a better future.

“Coach taught us that life isn’t always going to be easy, but with God walking with you, you can make it through anything,” Beck said. “He has made an everlasting impact on our lives.”

The first state tournament appearance came in 2008, when the Lady Tigers finished as the Class 3A runner-up.

Wilson said he remembers that fondly.

“Nobody knew anything about Straughn, as far as softball goes,” Wilson said. “Just that whole experience — those three days— we lost our first game, and battled back through the loser’s bracket for the state championship.”

At the tournament in 2008, Wilson said he recalls telling someone that he didn’t realize the team was playing for the state championship because the Lady Tigers had to play one game after another.

“That, to me, was probably the most fondest memory,” he said. “To see the expression on the girls’ faces, seeing the excitement in the atmosphere and what was talked about. That was their main objective was to get there. That made it satisfying to see how they reacted to being there.”

What really “surprised” Wilson when he came to Straughn to see how hard the girls worked.

“I was more surprised at the work ethic they had,” he said. “They were willing to work extremely hard. They seemed like they were always willing to work, and put in some extra time.”

On Tuesday night at the annual spring softball banquet, Wilson said it didn’t feel like it had been seven years since he took the program’s reigns.

“I guess it flew by, these last seven years since I have been coaching softball,” he said. “I would credit a lot of the success to was not only that they were talented and athletic, but they were very coachable.”

And that’s what made his and assistant coach Candace Tucker’s job a lot easier, Wilson said.

“They were accepting of it, and to the best of their ability, they strived to do what we asked,” he said. “That always makes it a pleasant experience.”

Wilson and wife, Melodie, have no plans on leaving Straughn he said, and will continue as an assistant coach on the football team, leading the offense.

One thing the he said made the past seven years special were the people involved in the program.

“This is not because of me,” he said. “There were a lot of folks working together. I think that’s what makes it special out here. You have so many folks that are willing to work, and put in labor hours to get stuff done that you just don’t have everywhere.”