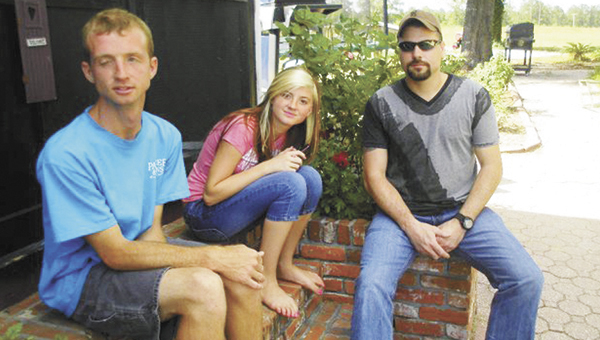 Friends of Vincent McNemar, who, along with his son remains hospitalized from injuries sustained in a May 7 wreck, are planning a benefit for his family.

Mc-Ne-mar, his son, William Reed, 28, and his daughter, Paige McNemar, 14, were all injured in the accident on Hwy. 55 in Red Level. McNemar and Reed were both airlifted from the scene, and Paige McNemar was taken to Andalusia Regional Hospital and later transferred to Pensacola.

“He can’t talk because he has a trach, but we have been able to communicate with him through facial expressions,” he said. “Yesterday while we were there, he lifted his arms and scratched his face, so we know he has fine motor skills, which is a really good sign.”

“They treated it very quickly, and kept him heavily sedated,” he said. “We are very thankful for that.”

Prior to the wreck, the elder McNemar worked two full-time jobs as a nurse. Many are residents will know him from his work as the night charge nurse in intensive care at Andalusia Regional Hospital, but he also worked at Baptist South in Montgomery.

Soon, he’ll be transferred to the Shepherd Center in Atlanta for rehabilitation, his son said.

Local friends hope to help defray some of the family’s travel and living costs as they support both the recovery of both men. McNemar’s ARH supervisor, Amy Truman, is organizing a gospel concert for 6 p.m. on Sat., July 2, at the Martha and Solon Dixon Center for the Performing Arts. Glorious Disaster will open the concert, and will be followed by B-Shoc, a Georgia Christian rap artist, who is participating for the cost of his gas and hotel room.

Truman said organizers will take donations for the McNemars at the door, and a love offering for B-Shoc during the performance.

“We’d really like to thank the different businesses who’d helped us raise the money for fees for the Dixon Center and the sound equipment,” Truman said.

“We’d like to thank all the Florala, Andalusia and Covington County businesses for their help with this,” she said.

Those unable to attend the concert can make contributions to the Vince McNemar Benefit Fund at Regions Bank.