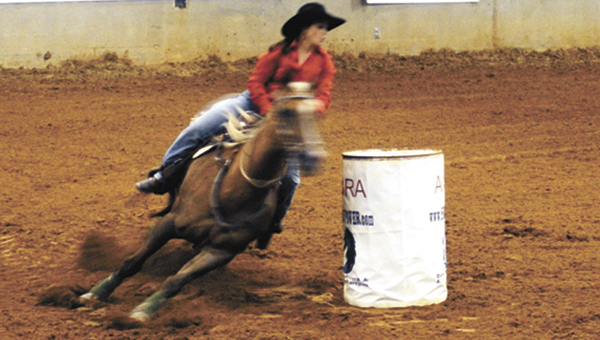 Straughn’s Katie Beck will represent the state, county and her school at the national rodeo finals in Wyoming. | Andrew Garner/Star-News

There’s nothing sweeter than Honey.

Beck, riding on her horse, Honey, tallied a 15.4 second run Saturday night to claim the No. 2 spot, and earned the best average ride of the tournament in the barrel racing category. The best average is taken over the three rides during the state finals.

She said her ultimate goal was to make it to nationals.

“It worked out really nice for me,” Beck said about her run at the Alabama High School Rodeo state finals. “I’m pretty pleased with that.”

Beck said in the end, Honey performed like she was supposed to in the state finals.

Beck said during the tournament, there were no big mistakes made, and that each run was executed well.

“I just owe everything to my horse,” Beck said. “She makes my job really easy. If I do my part, then we’ll do good.”

Honey’s owner is Kayla Coker, and she’ll be making the trip with Beck to Wyoming for nationals, which take place July 14-24.

“I’m so excited,” Beck said. “It’s an opportunity of a lifetime to go to Wyoming to represent not only my state, but Covington County and my high school.”

Additionally, Maggie Holmes, also of Straughn High School, qualified in the rope bending category to earn a spot at nationals. She will also be making the trip with Beck next month.

Beck is the daughter of Jeffrey and Beverly Beck of Andalusia, and Josie Beck.

Dewrell: ‘I was kind of in shock’

Josh Dewrell said he didn’t believe he was chosen as the Class 4A pitcher of the year. | Andrew Garner/Star-News... read more