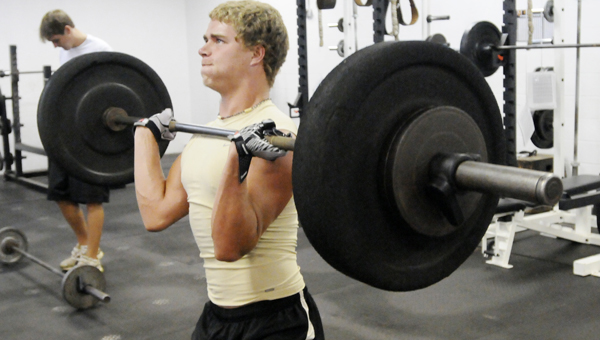 Straughn’s football team is already in its second month of summer work outs, and head football coach Trent Taylor said preparing for the fall season couldn’t be going any better.

“It’s been good,” Taylor said. “I’m not going to sit here and tell you that we’ve got 100 percent of our kids that have made every work out.

“As of right now, our kids have done really, really well,” he said.

The Tigers started their summer work out program in June, where they went three days per week — Mondays, Tuesdays and Thursdays — with two groups working out each day. One group works out in the morning, and the other in the evening.

On Mondays, the Tigers do agility work; Tuesdays were dedicated to plyometrics; and Thursdays were for sprinting and some form of running.

Last week, Straughn took the week off, as it normally does after the Fourth of July holiday.

During the second half of the summer work out program, Taylor said the coaches will start implementing more offense and defense, as well as the kicking game on Mondays, Tuesdays and Thursdays, in addition to the normal work out routine.

Taylor said participation this summer hasn’t been a problem, noting that more kids come to work out in the morning than in the evening.

These next few weeks will determine who stays and who goes for Straughn, Taylor said.

“These next three weeks will tell the tale,” he said. “Unfortunately, we’ll lose some. You hope you don’t. We want everyone of them to stay out and be a part.

“I think there are some valuable things they can learn,” he said. “Unfortunately, it doesn’t work that way. You tend to lose a few when you get closer and closer (to the start of the season).”

“A lot of these young ones will have to play and play right away, and I think they understand that,” Taylor said. “They know what goes into it. I think our older kids have done a good job doing their part to motivate them.

“Sometimes when you’re hurting, it’s hard to motivate the guy next to you that’s hurting,” he said. “You’re just trying to survive yourself.”

Straughn will play host to its annual 7-on-7 football tournament at the high school stadium next Thurs., July 28, at 4 p.m.

Straughn’s Katie Beck will represent the state, county and her school at the national rodeo finals in Wyoming. | Andrew... read more