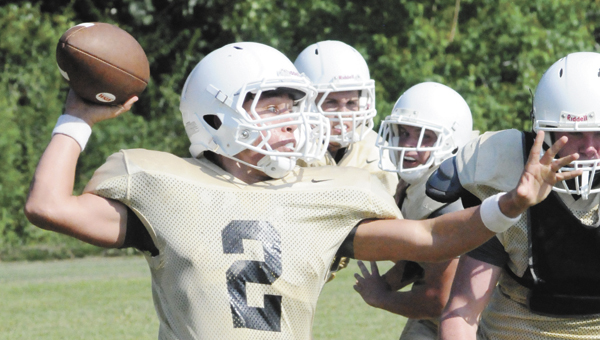 Straughn coach Trent Taylor said the Tigers’ coaching staff is just about as anxious as the players are for the team’s season-opener Friday night against Geneva at Straughn stadium.

The Tigers will take the field for the first time, facing an opponent other than themselves.

Straughn didn’t participate in a jamboree game, which isn’t unusual.

Taylor said he had the chance to watch Geneva last week during its jamboree game. He said the Panthers are a much improved football team from a year ago.

Additionally, Taylor said he noted that Geneva’s players were more confident on the field.

“You could just tell watching them on the side line,” he said. “They seem to be real cohesive.”

For many of Straughn’s varsity players, this will be their first time playing in a varsity game.

The Tigers have 13 seniors and 10 juniors that make up their upper class this season.

Taylor said during the last four weeks of practice, the coaching staff has tried to challenge the core group of players.

“We’ve talked about our youth and inexperience,” he said. “We try to make them understand that everything we do is textbook.

“Watching film from practice, I’d say we’re not to that point yet,” he said. “We’ve got to be better on week two than week one, and on week four and so on. Their main goal is to improve each week on the field.

“It’s a group of young men that if they’ll keep their focus and concentrate on the field, then they can be a good football when the year is out regardless of what grade they’re in,” he said.