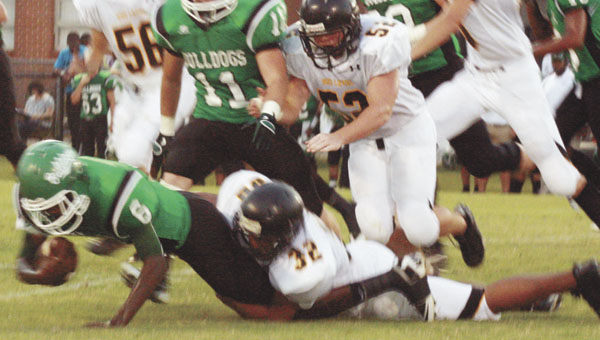 BRANTLEY – Red Level was no match for a determined Brantley team Friday night at Bulldog Stadium.

Brantley shut out Red Level 62-0 in the season opening game.

The Bulldogs scored on their first possession of the game with a blocked extra point, putting them up 6-0 with 8:48 left in the first quarter.

Brantley struck again with 5:50 left in the first quarter and had a successful two-point conversion, making the score 12-0.

With 3:33 left in the first quarter, Brantley’s Zack Wiley scored a touchdown and quarterback Andrew Parker crossed the goal line for a two-point conversion, making the score 22-0.

With 9 seconds left in the first, Wiley scored again and kicker Taylor Tew made the PAT, putting Brantley up 29-0.

Additionally, Brantley’s Steven Walker was ejected from the game for unsportsmanlike conduct.

The Tigers had possession of the ball going into the second half, when Brantley’s Chester Person picked off quarterback Troy Nolen with 11:38 left in the second quarter.

Red Level fumbled in the ball with 9:09 left in the half, and Brantley recovered.

Brantley scored once more before the half, putting them up 43-0 at the break.

The Bulldogs scored three more touchdowns to cap the win over the Tigers in the second half.

The Tigers will kick off region play next Fri., Sept. 2, on the road in New Brockton.

Pleasant Home swept Red Level 3-0 Thursday night. The Lady Eagles came back from a 9-20 deficit in the second... read more