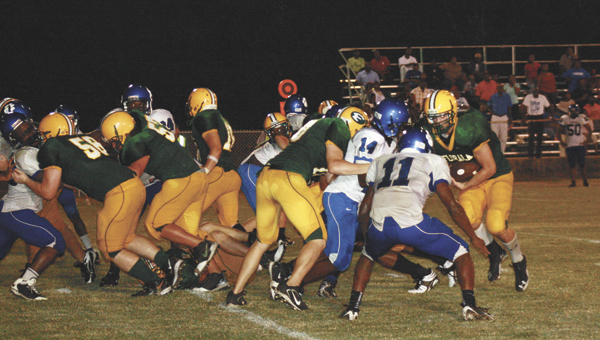 The Florala Wildcats lost to Georgiana 42-20 in a penalty-ridden game last night.

Flags peppered the field, with penalties ranging from personal fouls to off-sides to roughing the passer; still Florala Coach Justin Jones said he didn’t think they impacted the game.

“There were a lot of flags thrown,” Jones said. “I’ve said that the best defense is a offense on the field. We didn’t have that tonight. Some of our problem was (Georgiana’s) big plays. I tell my boys we’re going to continue to do what we do, work hard and be back stronger (next) Friday night.”

The Wildcats started out strong, putting the first points on the board with 7:07 left in the first quarter with a pass from Austin McNeill to John Bess. The Wildcats capped the TD with a two-point conversion, bringing the score to 8-0.

The Panthers came back with 8:56 in the second quarter, scoring on an 80-yard run. With a two-point conversion, they tied the game 8-8. Less than six minutes later, Florala’s Hunter Oswald scored with 2:04 left in the half, but the point after attempt was no good.

It was more back and forth between teams as Georgiana scored on a 50-yard run with 41 seconds left in the half, bringing the score to 15-14.

The Panthers came back from the half strong, scoring a 90-yard touchdown run just 17 seconds into the third. The PAT was good, and Georgiana was up 21-14.

It wasn’t long before the Panthers were in scoring distance again, with Georgiana again running for another touchdown. Their two-point conversion attempt was no good, thanks to a block by Florala’s Colt Jackson, bringing the score 27-14.

The Wildcats were unable to come back and defeat the Panthers, scoring only once in the second half of the game, with 4:20 left in the third.

Georgiana scored again, capping the TD with a two-point conversion with 8:16 left in the fourth and again with 1:26 left to go in the game. The final was 42-20.

So you think Irene was a storm? Please

As I watched the Hurricane Irene coverage from start to finish, I was amazed at the creativeness of the media... read more