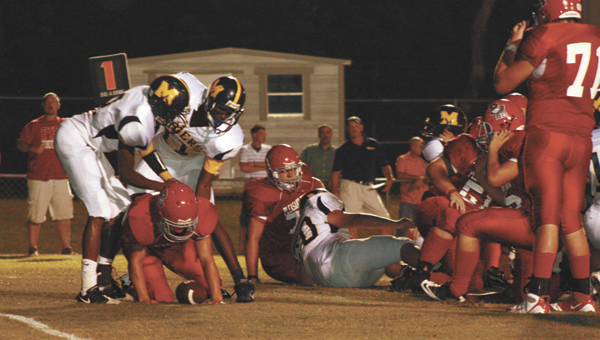 A very hard week of practice paid off for Pleasant Home, with the Eagles racking up 292 yards rushing to defeat McKenzie, 24-12 at home last night.

“We practiced hard this week, but they finished, “ coach Ronnie Douglas said. “I’m very pleased with how they played. We had some that battled through some adversity, and some pains, but they came back from a very hard week.”

The Eagles kept to the ground most of the night, and were one-for-one passing, for a total of 298 yards of offense.

Hunter Weaver led the rushing with 94 yards, and scored two of the Eagles’ touchdowns, including one when he recovered a fumble for a 90-yard run.

Gabe Gunter collected 20 yards and the Eagles’ third touchdown. Kaleb Powell added three with a 35-yard field goal, and each of his three PATs were good.

Also gaining ground for the Eagles were Hutner Greathouse with 94 yards; John Cole Chesser with 23 yards; and John Newby with 25.

Gunter had two interceptions and Hunter Odom had one.

The Eagles, now 1-1, face Kinston at home next week.