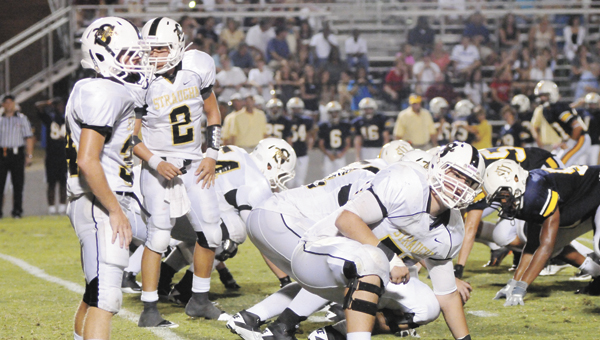 Straughn head coach Trent Taylor said his kids learned a lot about themselves after last week’s loss to St. James, and will apply what they learned this week as the Tigers play host to Alabama Christian Academy Friday night to continue in region action.

The Tigers (1-1, 0-1 in Class 4A, Region 2) spent Monday listening to what the coaches had to tell them in their individual position groups, Taylor said.

“I think it was certainly a learning experience for the kids,” Taylor said. “Consequently, (Monday), even though it wasn’t a beautiful day to practice football, I think our kids certainly were a lot more attuned to what we had to say, and what we had to teach.”

Straughn’s coming off a 20-0 loss to St. James, and will face an Eagles football team that fell to rival Andalusia 26-7 on the same night.

ACA’s only score came on an 85-yard kick off return for a touchdown from running back and all-around player Danny Madison, who is a senior.

Taylor said the key to stop Madison is making sure the defense knows where he is on the offensive side of the ball.

“It’s one of those things that he’s not a real big kid from a height stand point, but is real strong, real shifty and just hard to tackle,” he said. “He ran a kick off back against Andalusia — a team with a lot of speed. So, that tells you he can run pretty good.”

Additionally, Taylor said Riley Akin, a senior full back and linebacker, will also pose a threat to the Tigers this week.

Taylor said ACA runs a defense similar to what the team has seen before.

“They play a lot of man coverage, which is what most people do to us anyway,” he said. “We’ll see a lot of what we saw last week with folks in the box.

“That’s a challenge for us offensively,” he said. “We’ve still got to be able to take that challenge and root those guys out of there.”

Turvin hands off to Short MONTGOMERY — St. James strutted out to a 13-0 half time lead, and scored late... read more