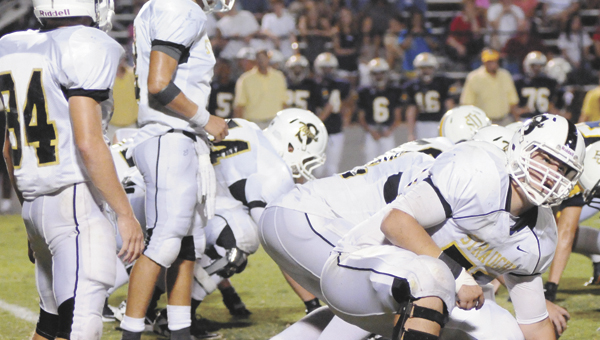 Leading into this week’s region contest against Hillcrest-Evergreen, Straughn head football coach Trent Taylor said the focus this week is still trained on the Tigers.

“It’s a whole lot more about us than the opponent,” Taylor said. “We’ve still got a lot of things we’ve got to work on. You’re still aware of what you’re doing on offense and what they’re doing on defense — what they’re in and that kind of stuff.

“We’ve just got to get better,” he said. “That’s the biggest thing.”

A “changed” Straughn team is coming off a 34-7 victory over Alabama Christian Academy, where the Tigers went into an odd-man defensive front and went back to the “I” formation on offense, Taylor said.

“It’s not like we’re doing anything a whole lot different,” he said. “It’s just that our formations are a little bit different. We’re trying not to dictate to the defense which way we’re going and allowing the them to scheme against us.”

Hillcrest-Evergreen has only won one game this season — its season opener against Monroe County. The Jaguars lost their next two games against region opponents Headland and Ashford, who remain undefeated this season.

“(Jaguars coach Larry Boykin) (is) playing a lot of young kids,” he said. “As a matter of fact in watching the film on Sunday, a lot of the kids we played against on the B-team a couple weeks ago were actually on the field.

“Still, young athletes are still athletes,” he said “The biggest thing for them which I think is a little bit surprising is that they are having a little of trouble scoring for whatever reason.”

Hillcrest-Evergreen has only scored 38 points this season, after a shutout performance against Ashford last week, a 38-19 loss to Headland in week two and then the 19-0 season-opening win against Monroe County.

One stark difference between ACA and Hillcrest-Evergreen is the amount of players that can make plays on the field, Taylor said.

“ACA, even though they were a spread formation, they still relied on their running game,” he said. “Hillcrest, at any point will drop back and throw it to the end of the stadium. They have guys that can go get it. It’s obviously a different look than what we had last week.”

This week’s game is still just a region game, and Taylor said the players need to keep that at the front of their minds.

Kick off in Straughn is at 7 p.m. Friday.

Injury update: Sophomore nose guard Jeffery Fraze has an MRI scheduled for this Friday on his hurt knee.

Straughn's Tigers made some changes in their preparation for Alabama Christian this week. The Tigers utilized turnovers, and cashed them... read more