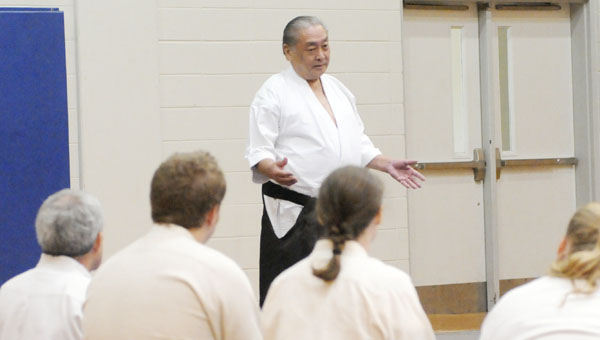 Aikido master Sensei Roy Suenaka brought his 58 years of knowledge in the martial art he has come to know and love to Andalusia on Saturday at LBWCC.

Suenaka, originally from Hawaii and a resident of Charleston, S.C., spent the day teaching approximately 30 students his style of Aikido.

He began studying Aikido in February 1953, and was taught by the founder of Aikido, Morihei Ueshiba, and the grand son of Sokon Matsumura, who was responsible for developing modern day karate.

“Almost all of my teachers were considered the greatest masters in their particular art,” Suenaka said.

Suenaka said it was a great experience to be taught by Ueshiba.

“It was very enlightening,” he said. “I’ve never met a martial artist like him. He had so much aura and energy.

“Whenever you approach him, everybody would be in awe of him,” he said. “He was the greatest master I’ve studied under.”

When asked how Aikido is different than other forms of martial arts, Suenaka said it has one difference.

“Most martial arts are offensive in nature, whereas Aikido is strictly defensive,” he said. “We may do some forms of punches and kicks, but really as a form of deception.”

Darryl Shepherd of Gantt, who participated in the seminar on Saturday, said Aikido is one of the reasons he moved to the area from Crenshaw County.

Shepherd said he was thoroughly enjoying being taught by Suenaka.

“I love it,” he said. “It’s the reason why I wanted to come to Andalusia. I’ve wanted to study it for years.

“I love the Sensei,” he said. “He’s a great teacher and has many amazing stories.”

“I had to use somebody,” he said. “Harry offered me to use his student, and one of them happened to be Steven Seagal.

“This was before I even knew he was going to be such a big movie star,” he said.

Suenaka said the students learning from him at the seminar on Saturday at LBWCC were doing really well because they have an “excellent teacher” in LBWCC president Dr. Herbert Riedel, who teaches an Aikido class every week.

“Dr. Riedel is a very good teacher,” he said. “He’s been a student of mine, and a good friend of mine for the past 23 years.”

Saturday’s seminar was the first time Suenaka taught Aikido in the state of Alabama.

Does your girl want to cheer?

Does your little girl dream of being a cheerleader? If so, the annual Andalusia High School cheer clinic may be... read more