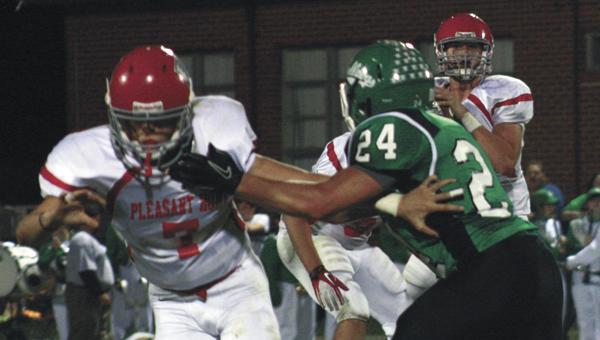 Weaver managed the touchdown in the fourth quarter and Kaleb Powell’s PAT was good.

Brantley forced at least six turnovers in the first half, capitalizing on them.

The Bulldogs scored twice in the first quarter, one as a result of an interception, putting them up 14-0 on a Clint Kilcrease touchdown.

Zach Wiley ran in for 2.

Brantley’s Terrance Bogan had two interceptions in the second quarter.

Wiley scored with 5:08 left in the second quarter and the two-point conversion was successful, putting the Bulldogs up 22-0.

Pleasant Home fumbled the ball on its next possession.

Brantley’s Chester Person scored a touchdown with 2:18 left in the half.

Pleasant Home fumbled the ball again with 1:37 left in the half.

The Bulldogs intercepted the ball with 47 seconds left, and Wiley scored and the PAT was good, putting Brantley up 42-0 at the break.

“We haven’t seen anyone like them,” he said. “And we probably won’t until the playoffs. They cause teams to make a lot of turnovers.

“That’s what good teams are,” he said. “They do what they do. They played with a lot of class.”

Despite the loss, Douglas said he was “proud” of his boys.

“We played 24 minutes of decent football in the second half,” he said.

The Eagles will travel to Georgiana to take on the Panthers next Friday night.

Douglas said the Eagles must beat Georgiana and Geneva County to clinch a home-field playoff berth.

“We’ve got to take care of business,” he said. “And work real hard.”