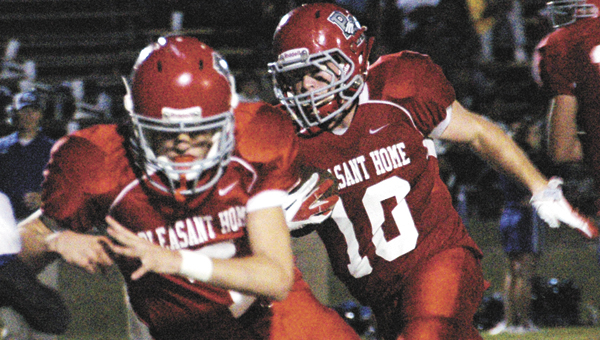 The Pleasant Home Eagles were able to hold off the Georgiana Panthers Friday night at home, 33-14.

Pleasant Home notched its first score when quarterback Gabe Gunter decided to keep the option and raced 46 yards down the sideline for the touchdown and the lead.

After Hunter Weaver picked off a Georgiana pass, the Eagles’ offense was in business again, this time from inside the Georgiana red zone and Gunter added his second touchdown run of the night on a 1-yard quarterback keeper.

Georgiana threatened on their following possession, moving the ball inside the Pleasant Home 10-yard line before Hunter Odom came up with an interception in the end zone to neutralize the threat.

Following the turnover, the Pleasant Home offense closed out the first half with an 80-yard scoring drive when Gunter reached the end zone for the third time, giving PHS a 20-0 halftime lead.

The Pleasant Home defense started the second half by forcing a three and out. Following the defensive stop, the Eagle offense was at it again, this time marching the ball down the field on a 76-yard, 11-play drive that was capped off by 6-yard touchdown run from Cameron Hill.

After being shut out for the first three quarters, the Georgiana offense was finally able to get on the board with the first play of the fourth quarter when quarterback Jacquez Payton hit Rickey Everett on a 15-yard touchdown pass. After a successful two-point conversion, the Pleasant Home lead was cut to 26-8.

With just over 5 minutes remaining, the Georgiana offense wasn’t done yet as Payton tossed his second touchdown pass of the game, this time finding Javanta Williams on swing route and Williams took the pass the remaining 13-yards for the score.

Following an unsuccessful onside attempt by Georgiana, the Eagles used the short field to their advantage and added another touchdown. Freshman John Cole Chesser was able to find the end zone from two yards out to give the Eagles a final score of 33-14.

With last night’s win, Pleasant Home clinched a spot in the playoffs and moved to 5-2 on the season. Pleasant Home is off next week but travels to Geneva County Oct. 21.

Florala's Austin McNeil tries for a pass, but gets some pressure from a Geneva County player. | Stephanie Nelson/Star-News It... read more