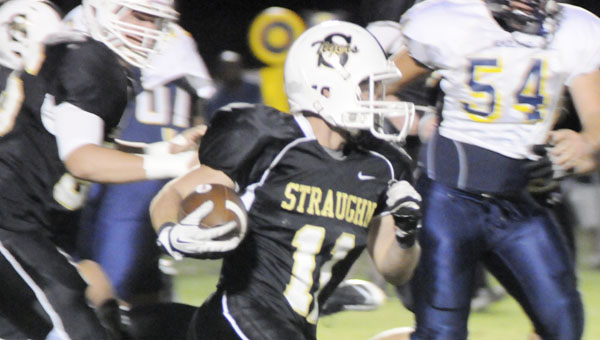 Straughn’s playoff hopes were dashed Friday night when the Tigers fell to the Headland Rams 24-13 on homecoming.

With this loss, the Tigers fall to 4-4 overall, and 2-4 in Class 4A, Region 2. SHS needed to win its last two region games in order to clinch a playoff berth.

Straughn elected to defer to the second half at the coin toss, and Headland took advantage on its first offensive possession.

Running the ball down to the Straughn 7-yard line, Rams running back Adrian Calloway took it for Headland’s first touchdown and his first of two for the night. The 2-point conversion was no good for Headland, and the Rams took a 6-0 lead with 8:08 left in the first quarter.

The Tigers couldn’t do anything on their first offensive possession, and on a bad snap for the punt, Headland found itself at the Straughn 7-yard line again with 4:53 remaining in the opening quarter.

However, a key tackle netted a fumble for the Tigers, and Straughn took over at its own 1-yard line with 3:25 left in the first quarter.

Compared to last year, Straughn has had an up-and-down season from the start. The Tigers beat Geneva 40-21 on week one, lost to St. James 20-0 at week two, beat Alabama Christian 34-7 on week three, lost a close game to Hillcrest-Evergreen 27-26 in overtime, beat rival Opp 14-13 in overtime, beat Bullock County 40-12, and lost to rival Andalusia 37-3 last week.

With the loss to the Bulldogs, the Tigers needed the win against Headland in the hopes it would propel them to a victory next week over the Yellow Jackets .

After Ashford, Straughn will close the season on a Thursday game against Class 3A’s Daleville.

The Tigers couldn’t get anything going on their second offensive possession and the score was 6-0 at the end of the first quarter.

At the start of the second quarter, the Tigers found themselves in good field position, and rushed down to the 14-yard line.

Straughn running back Devin Scott scooted in from 14 yards out, but a holding call on the young Tigers team canceled the score.

Headland got the ball back with more than eight minutes to go in the first half, when three plays later a strange play occurred.

Straughn’s Keith Edgar intercepted a pass from Headland’s Aaron Sanders, but lost it on the way down and kicked it in the arms of Headland’s Skipper Murphy. That set up the Rams with a first down, that eventually led to another Calloway touchdown rush from 14 yards with 4:34 left in the first half.

Straughn answered with 2:55 remaining when Chase Short scored on a 71-yard scamper to cut into Headland’s lead at 12-6.

In the fourth quarter, the Rams took advantage of a Straughn fumble and scored on third down from inside the 10-yard line with 7:37 on the clock. The 2-point conversion failed, and Headland went up 18-6.

The Rams scored against with under three minutes left in the contest on a pass play from the 4-yard line. The 2-point conversion failed, and Headland went ahead 24-6.

Despite the loss, the Tigers did end their homecoming on a high-note when Nigel Byrd scored his first-ever touchdown with only seconds left on the clock. The point-after kick was good.

The Tigers will travel to face Ashford next week.

4 local teams to compete in regionals