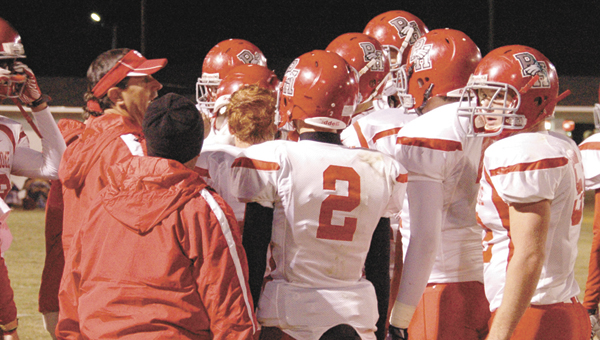 A win this week against Cottage Hill Christian Academy would not only give a boost to the program at Pleasant Home, but will boost the Eagles’ morale leading into next week’s first round of the Class 1A state playoffs, head football coach Ronnie Douglas said.

“We’re going to have to be on our ‘A’ game to have a shot at them,” Douglas said about the Warriors. “It’s going to be senior night for us. It could be their last chance at home. It should be a good game.”

PHS will honor its 12 seniors on the football team 30 minutes prior to kick off at 6:30 p.m. at Eagles Field.

The Warriors are coming off a 57-12 loss to Mobile Christian, who diminished any possibility for them to earn a playoff berth.

Pleasant Home lost to Geneva County 17-8 last week to force the Eagles to be the No. 3 seed in the first round of the playoffs.

Douglas said CHCA runs a spread offense with a good quarterback at the helm in Lee Cockrell.

On defense, Douglas said the Warriors (4-5) run a multitude of formations.

“They run a 4-3, 40-front and then some 50-front,” he said. “They played Southern Choctaw (and lost 39-6) and couldn’t get anything right. They play a tough region down there with Leroy, Flomaton and Southern Choctaw.

“Mobile Christian is in their district, and they beat up on them pretty good,” he said. “They beat J.U. Blacksher the week before. They’re pretty good football team.”

The keys this week for PHS are ball control and keeping the penalties and turnovers down, which plagued the Eagles last week in the loss to the Bulldogs, Douglas said.

Additionally, Douglas said a win this week would also be big for the seniors.

“Everybody feels better when you win,” Douglas said. “The bumps and the bruises don’t hurt near as bad.

“It would just be good, one for the program and it would be real good for the seniors,” he said. “We have 12 seniors that have done a real good job with us. I’m a new coach coming in, and those guys have stuck with the program and stuck by me. I’m just real proud of our seniors.”

Kick off at Eagles Field in Pleasant Home on Friday is at 7 p.m.