PHS water girls do it all, literally 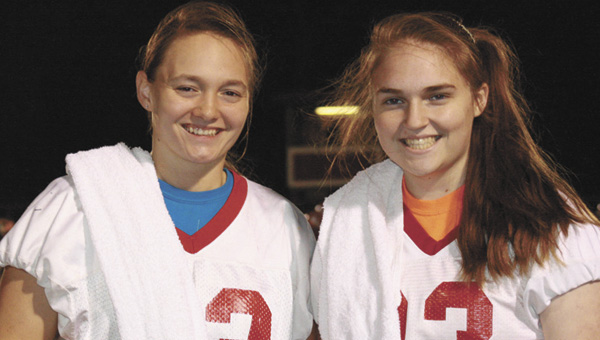 Pleasant Home senior Mary Schwartz and junior Courtney Slaughter have been through a lot as the Eagles’ water girls this season.

This is Schwartz’s second season to be the water girl, and Slaughter’s first on the varsity football team.

For the past 10 weeks, the water girls have literally dealt with blood, sweat and what seems like an endless stream of nasties spewing from the players’ mouths.

“You’ve got to have a tough stomach,” Slaughter said.

Moving past all that, both girls said it’s been a lot of fun being the water-delivery system of the team.

Even if the players yell at them, the girls take on a supportive role, Schwartz said.

“You’ve got to be supportive of them no matter how much they yell at you,” she said.

As many trick-or-treaters walked or lurched their way through neighborhoods last night for Halloween with fake blood pouring from their extremities, both girls found that having real blood in their hair is a part of the job.

“You’ve got to be used to blood, because I got blood in my hair last Friday night,” Slaughter said.

And even the trips on the bus are always interesting, both said.

This Friday night, the Eagles will travel to play St. Jude in Montgomery in the first round of the Class 1A state playoffs.

Schwartz and Slaughter said they couldn’t be more “proud” of the team for making it this far.

One rule the girls said they have to follow on the job is that you “can’t flirt with the guys” on the football team.

Would you want to flirt with them?

However, Schwartz and Slaughters don’t only just have water duties on Friday nights. On Friday mornings, both try to give the players candy and a Bible verse to take with them.