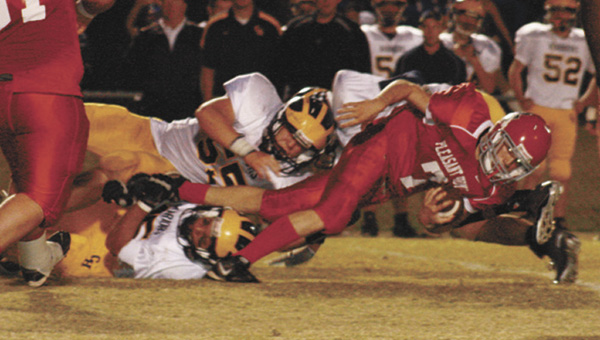 Pleasant Home’s playoff record in its last four post season appearances is 0-4, but the Eagles hope to change that, and advance to the second round of the Class 1A state playoffs when they take on the St. Jude Pirates this Friday night in Montgomery.

PHS head football coach Ronnie Douglas, who is in his first season at the helm of the Eagles’ program, said it would be great for the school and team to be able to make it past the first round.

Pleasant Home (6-4) is coming off a 48-28 end-of-the-regular-season victory over Cottage Hill last week.

Douglas said getting that win was key in the lead up to this week’s game.

Pleasant Home’s Jon Cole Chesser, who was nominated as a potential offensive player of the week in this week’s Alabama Sports Writers Association Player of the Week poll, scored on runs of 86 and 39 yards, caught a 71-yard touchdown pass and had a 73-yard kickoff return for a score in last week’s victory. With last week’s game, Chesser now has 561 rushing yards and four touchdowns on the season to lead the Eagles.

The Pirates’ only loss in the regular season came to Winterboro in week four, where they lost 28-26.

“Both teams will come into the game with their ‘A’ games,” Manora said. “We sat down (Sunday) and looked at Pleasant Home, and I could tell that they’re a well-coached team.

“They’ll do what they do to try and win,” he said.

In St. Jude’s arsenal, brothers and running backs Byran and Bryan Brower pose a threat to Pleasant Home on both sides of the ball, Douglas said.

“Bryan is very good,” Douglas said. “He’s all over the field.”

At the helm of the Pirates’ multiple-look offense is junior quarterback Tony Minnifield, who Douglas said “can throw it a mile.”

On defense, Antonio Justice leads the Pirates in tackles with 101 in St. Jude’s 3-4-40 formation.

“We’ve just got to execute on offense,” Manora said. “That’s the biggest key for us. On the defensive side of the ball we need to make sure we tackle well.”

In preparation for this week’s game, Douglas said he’s telling the team to mainly focus on St. Jude’s speed and athleticism.

“We can’t replicate or duplicate anything like that,” Douglas about the speed. “They’re going to stretch you horizontally and vertically (on offense).”

Last year, St. Jude made a run in the playoffs, advancing to the third round, where it got beat by Sweet Water on the road.

Manora said it’s good to be back in the post season.

“We’ve been waiting all season to get back to this stage,” he said. “We’re excited.”

Douglas echoed what Manora said about the team being ready for the playoffs this week, noting that the players are up for the challenge.

“If we get by this first round, it would be the furthest Pleasant Home has ever gone,” Douglas said. “They’ve never got to the second round, and the coaches and players are excited.”

The game between Pleasant Home and St. Jude will be held at the stadium on the Montgomery Catholic Preparatory School’s campus in the capital city.

Kick off in Montgomery is at 7 p.m.

PHS water girls do it all, literally