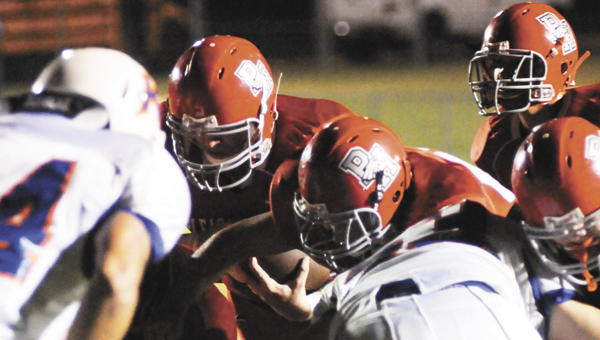 Gabe Gunter scored in overtime last night to advance Pleasant Home to the second round of state playoffs. | File photo

Trailing by a point in overtime and standing three yards away from a potential two-point conversion and win over St. Jude in the first round of the Class 1A state playoffs, Pleasant Home quarterback Gabe Gunter says he was only a little nervous.

The 6-foot-5, 230-pound quarterback took the snap and charged up the middle. He was hit and stopped at the 2-yard line, started falling forward and stretched the ball toward the goal line.

Even the officials on the field weren’t initially sure.

The line judge first marked the ball just short. After a brief pause, the head linesman threw two hands into the air to signal the two-point conversion was good.

“It just wasn’t our night to win,” Pirates head coach Wade Manora said. “That’s all I can say. It wasn’t our night. The one guy marked him short, but I guess it wasn’t his call. I don’t know. It was very close.”

There was, of course, no doubt in Gunter’s mind.

The Pirates were devastated.

Coaches and players immediately began pleading with game officials, who seemed to be unsure for a few moments about what to do. Finally, they jogged away, leaving the St. Jude coaches to console their players.

The high-scoring, speedy Pirates offense was slowed to a crawl by a crafty gameplan from Pleasant Home head coach Ronnie Douglas. Using the old wing-t offense, and its variety of misdirection running plays, the Eagles were able to milk the clock.

The Pleasant Home coaches made sure the 25-second play clock was nearly exhausted after every play.

“We wanted to take the ball away from them and that offense,” Douglas said. “We can’t compete with their speed. That’s a heck of a football team over there and we were just trying to do whatever we could to keep it close.”

The first half took less than an hour and neither team had scored.

Pleasant Home opened the second half with an onside kick, then moved 46 yards in 13 plays to take a 7-0 lead on a Hunter Greathouse five-yard run.

St. Jude answered with a 12-play drive, as it moved 62 yards and tied the game on an eight-yard TD pass from Tony Minnifield to Kendall Richardson.

From there, the Pirates squandered three more chances to score. They fumbled a snap inside the Pleasant Home five that killed what looked like a sure scoring drive, missed a short field goal on their next possession and had another bad snap kill their final drive inside Eagles territory.

“We made some mistakes and it just wasn’t our night,” Manora said. “That’s really all I can say.”

On the second play of the overtime period, Minnifield hit Jalen Rackley to give St. Jude a 14-7 lead.

And then Gunter took over.

He ran twice to get the Eagles’ TD. And then, after a timeout, ran once more for the game winner.

“I wasn’t going to put this game on a player (place-kicker Kaleb Powell) who hasn’t played all night,” Douglas said. “You have to go with the guy who’s got it done all night. It was a no-brainer as far as I was concerned.”