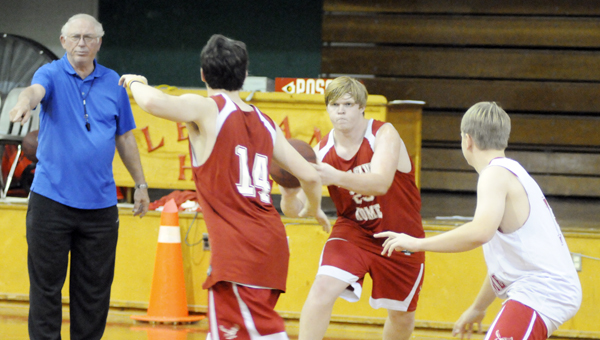 Pleasant Home’s 2011-12 season will kick off next Monday in a tournament at Houston Academy, and Eagles basketball coach Jerry Davis said he’s eager to get started.

“I’ve never practiced this number of days in 41 years of coaching and not play a game,” Davis said. “There are not going to be a whole lot of fundamentals or nothing going on. We’re just going to try and get some game stuff in.”

The Eagles will begin their season next Monday at the Houston Academy Tournament, where they will compete against three different teams in a round robin exhibition.

Part of the reason why PHS hasn’t began its season is because of the football team’s historical run in the playoffs. The Eagles finished in the second round of the Class 1A state playoffs last week, when they fell to top-ranked Linden 41-0.

Davis said typically when a football team has a successful season, then the basketball team will have one as well.

“The main thing is that we have nine players, and how healthy do we stay,” he said. “There doesn’t appear we have too many injuries from football.”

The Eagles will have six seniors — the most Davis said he’s ever had on a team — in Jeffery Slaughter, Kaleb Powell, Josh O’Neal, Tyler Worley, Austin Johns and Ty Bass. Additionally, PHS will also have three juniors on the team.

Davis said he hasn’t decided who is going to play where because he doesn’t have an idea who he’s got.

“I think mentally, we’re going to have a clue to start with,” Davis said. “It’s going to be one of those things where your brain knows what to do, but your body isn’t willing to do it.”

PHS will compete in Class 1A, Area 2 with rival Florala, Geneva County and Kinston this season.

“I think our area is a toss up,” Davis said. “The best team in our area will probably be Geneva County. Florala only lost one player, but picked up a player from Paxton, Fla.”

Davis said the Wildcats were a competitive team last year, and he expects them to show some fight come January, when area play begins.

“I feel like we’re in a hunt. I think we’ll get better as we go,” he said. “I’m looking forward to this season. If we stay healthy, then we’ve got a chance to be pretty decent.”

The Eagles finished their 2010-11 season in the 1A sub-region tournament, where they fell to J.F. Shields.